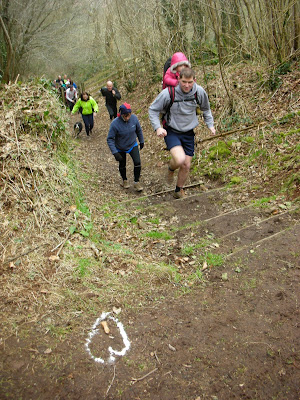 A new venue for todays Valentine hash, I don’t think we’ve ever started off from there? The official car park being tiny meant most of us crossed over the bridge and parked there. The hashers kept on arriving and before long there were well over 30 of us with some visiting hashers, Cuckoo from OVH3 and her family. The theme of the day was red as it was Valentines day and some of our younger hashers had made a fabulous effort with their fancy dress,
We circled up in the tiny car park, only having to disband straight away as we let a civilian car escape. Emerald at this point, sprinted (?) out into the road with a cry from Spocky, ‘Don’t lie down Emerald’, but she was just seeing them safely out. With Radio Ga Ga punctuating the hares instructions with her screaming, Twin Peaks gave our orders, lucky she has a good set of lungs too!!
She had been ably assisted by Groucho (is that not an oxymoron???). All the checks, hash halts etc were heart shaped, lots of kissing gates, fines for anyone not participating in the kissing and obviously there would be a sweetie stop.
On we were called up the hill where I believe the first fish hook of the day appeared. First 6 were set to come back. With a little bit of assistance from the hares, Tuned In found the trail while the others were still looking. Up a very steep hill where the children started checking out at the top of the steps, unfortunately they weren’t fully ‘au fait’ with the system and called on after only finding one dot. Eventually we set off on a bit more uphill through the woods and out onto a lovely woodland trail.
This led onto a long/short split with the longs heading down into the forest again, to loop back around and meet us at the end of the path. Here there was a great deal of loitering going on but eventually the frb’s called us on.
A few more kissing gates followed with Tail Lamp and Groucho seeming to keep ending up next to each other! One hasher chose to kiss a dog instead of a fair maiden…the cheek! At many of the checks there were letters which meant on this occasion hashers with any of the letters in their hash name had to check it out whilst the remaining pack exchanged love stories. This was flour power at work ! Not one hasher realised that only a limited number of letters were used and that if arranged correctly, spelt "lovers". Howling Wilf was caught out by the sheriff very slyly via another hasher who informed our trusted official that Wilf had called a false on-on, no love there then! We eventually got to the sweetie stop. We were treated to some lovely little heart shaped jelly beans with a few fruit pastilles and liquorice allsorts thrown in for good measure! Ah how lovely remarked several love struck members of the pack.
Soon it was time for yet another kissing gate, with several hashers now complaining about having sore lips. Serves them right I say! For those who love running our hare did of course put in three long short splits. She was heard to remark "well it won't do ‘em any harm". Towards the end of the hash there were to hash obstacles to contend with, the first a horse jump plus ditch, those who "refused" were fined and the second was a long log on which one had to get their leg over, failure to get your leg over resulted in a fine. Tail-lamp and Long Time Coming, pay up!
Back at the car park a large hash circle was held where fines were handed out.
There were also suggestions for some new awards for the annual hash awards ceremony. A trophy for best hash flash and a case of beer, I believe, for ’the hare-iest hasher’, this being whoever has laid the most trails throughout the year. More to follow on these….. But start ‘happy snapping’ now.
On On to Newton St Cyres next week
Ps Thanks Groucho for your help with the blog this week.