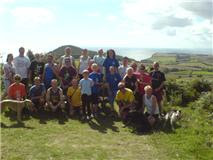 Well what a lovely sunny day remarked many hashers as they arrived in the car park, in fact 28 turned up today to form the pack. Our hares Slipshod and Doctor Jekyll were biting at the bit to get started, except neither really wanted to explain what havoc they had caused or were about to cause. Stat-Nav arrived very very late claiming he had been delayed due to going shopping, he was of course fined, as was Groucho for wearing sandals just before we set off. We set off at a blistering pace for the first fifty metres then came the first check. FF,Cathusalem and Groucho found the trail except it apparently was the wrong one, it was the trail but further on, we were fined, we all blamed each other but the pack still fined each any everyone of us. There were three long/shorts splits which helped the old,ill,lazy and slow hashers amongst the gathered throng of which there were several. Exbitz and Puss-in-Bootless were heard talking about something technical as we all zoomed on our way, until the not so technical Bootless managed a very untechnical slide on her bum as she attempted to thread her way down a muddy slope. The hares also decided to lay on some view point stopped, but whilst the pack gazed at one of these view points there was a sudden movement coming from the bushes behind us.Whats that one hasher remarked taking a step back, are there boars here another inquired taking two steps back ! In fact what emerged from the bushes was PP who as her name suggests had had one, she was of course fined for contaminating the environment I believe.Eventually we reached the sweet stop where Slipshod invited us to search for several packs of sweets whilst he sat on a gate watching the chaos beneath him.The trail levelled out after the sweet stop as the pace quickened if thats possible with this pack, but our hares soon put a stop to that with a series of fish hooks, in fact at one stage both hares were at the front, who do we run too ! Suddenly Doctor Jekyll realised that she was meant to be at the back, most strange seeing a hare doing their own fish hook.
Back at the car park Stat-Nav our acting sheriff was ruthless in dishing out the fines whilst Spocky held out his hand to grab the flow of ten pences.Well done hares its on-on to Forest Gate CP Ashclyst Forest, near Broadclyst next week.
Peak Hill Sidmouth. Sun 12 September 2010