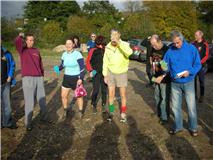 Mr Woodpecker, todays hare certainly produced a hash to remember, combining with Taunton H3 to swell our numbers to over fifty+.Our hare informed us that today the hash will be a" normal hash" withno long/short splits no fish hooks and only two hash halts. Having explained the usual markings he sent the whole pack over the main A3052 road to our first check next to a farm track, most of the pack headed up the farm track only to be told by the farmer that we couldn't go via his land. In fact we, most of the pack, were indeed on -on the correct trail. After a couple of minutes our hare appeared by which time PP had looked fondly at the farmer and her fell for his charms, we were on our way, but not before Handsome had suggested that all the women line up behind PP. Woodpecker had spoken to a farmer via the telephone the only problem was it was in fact the wrong farmer.Once on our we all faced a climb up the Devon Alps, the was probably getting thinner as we climbed judging by the heavy breathing, several hashers grabbing hold of trees on which to get a little support. As we reached the summit some twenty minutes later we saw Coffin who had in fact been waiting at the wrong venue, she was awarded the pink handbag upon our return to the Bowd Inn. Once we had reached a hash halt the back markers in the pack took some deep intakes of oxygen before the hare instructed us to check it out. Several minutes passed by before we were finally on our way once more this time enjoying a view of Sidmouth from on high as well as taking the benefit of flat ground, although there was a degree of water and of course mud. The hash pace had now increased with Slipshod and Radiohead leading the charge, meanwhile Groucho, Stat-Nav, Gaga, Oddbitz to namebut a few were by now bringing up the rear, this was the theme until the sweet stop was reached. Once at the sweet stop the goodies were soon consumed where a great deal of hash chat occured before the hare called us to order in his sergent major manner. From his lips can those words "check it out " and so we all did, well half of us did. We continued though the forest until we came to a rather steep descend with a very slippy surface on mud and moss for good measure. As the pack made their way down the call of a badgers set was made, judging by its size Mr Badger must be a rather wealthy fellow, the hole was enormous and what a view this badger had. Once down the hill the run was a lot easier and within fifteen minutes or so the sight of the finish could be spotted. In the car park several down downs were taken by members of the pac who had strayed from the straight and sometimes very narrow. A collection was made for Children in Need, which raised £77.00 ,thanks to all those who contributed, a cheque be sent off via Spockbitz
Also thanks Woodpecker and Son for a good trail, plenty of flour used and markings were very clear.
Four reminders this week, first next week's hash is from Joneys Cross CP just off A3052 near Newton Poppleford with FF and PP doing the honours. Secondly the AGM will be held at the Aylesbeare Inn after the hash next week, any shields/trophy winners need to return them asp and lastly any more hash T shirts/sweat need to be ordered by Sunday 28 November