By Helen Hibbins - June 07, 2015
It made a pleasant change to head to the south of the area for today’s hash. It was a select pack of City of Exeter Hashers, with it being the Gispert Gallop weekend, augmented by Flasher, Grim and someone else with dogs. Not ordinary dogs, but dogs that knew commands for left and right and didn’t trip you up. It was reminiscent of huskies pulling sledges. This was considerable advantage to the remainder of the pack who managed to avoid the fish-hooks as the dogs were so keen that they enthusiastically dragged their owners around on leads. Holeinone also brought her puppy along, but he didn’t fall into the aforementioned category as he wasn’t even allowed to walk and was small enough to be eaten by the others so couldn’t be trusted on the ground. Spring Forward and Fall Back were noted as latecomers, having travelled to a nearby retirement home, instead of following signs to the pub.

The trail was laid in some woods and was very disorientating. I hadn’t a clue whether we had been up the same track twice, but it was very pleasant, flat and therefore relatively fast-paced for a hash. There were plenty of sweeties at the sweetie stop; unusually not all were eaten, but then Chipmunk wasn’t there.
The trail continued along woodland paths with shiggy puddles that were just about avoidable in most cases eventually emerging on to the road a couple of hundred meters from the pub. A well laid trail on a lovely sunny morning.
Tell us what you thought of the trail by rating the hash - click here.
Next week's trail is in Exminster, at our house: 54 Milbury Farm Meadow, EX6 8FG, or click here for a map.  Turn into Exminster at the Exeter end of Dawlish Road (not the roundabout at The Swan's Nest).  Follow the road under the motorway, an take the first left on the brow of the hill.  Turn left, follow the road to the right, an take the first road on the left (not the car park!).  Follow the road and find our back gate.  There will be a BBQ if fine. 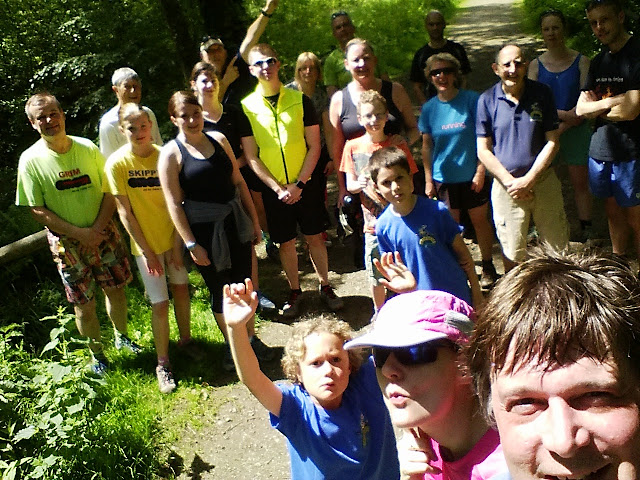