By Alastair Hibbins - February 21, 2016
Unusually, Woodpecker was in the car park before we arrived; and we were early.  It must have been because he had come on his bike (obviously to save money on the car parking charges) and perhaps, sometimes, his car makes him late.  Tampa also arrived before 11 and the circle formed up, rather casually, on time.  Groucho took charge and introduced several newcomers, including Simon with his lovely new shoes, who had only hashed once before with the A to B hash in the pouring rain, covering 13 miles.  Fortunately, neither the distance nor the weather would be a problem today.


The trail started off in the the direction of the railway station and then towards Darts Farm.  We headed left over the new cycle trail with built in bird hides and along a number of footpaths before reaching a hash halt near the bird watching centre, where Spocky showed Child Catcher some photographs of Wide Receiver's gash.
A long/short split followed with the longs heading towards another hide and through some mud before joining the short again just prior to the Goat Walk.  Holeinone was forced to move the sweetie stop to the slipway due to the number of normal people out for a sunday morning stroll, and a couple sitting on the bench right where the Sweetie Stop was marked.
We headed back towards the centre of Topsham where there was another long/short split.  At this point, most of the pack went wrong and headed up towards the shops, when the actual trail went along the estuary and up through the church-yard.
Another loop around the houses followed before the On Home.
Back at the car park, Simon was named Footloose and there were fines for (amongst others) the Nice -Butt family who may become regular latecomers!
Please don't forget to RATE THE HASH - the votes will be counted and prizes awarded at the 2016 Christmas Party.
Next week's trail is from Newton Poppleford, Back Lane car park (tennis courts). On Down: Cannon Inn. A map is here. 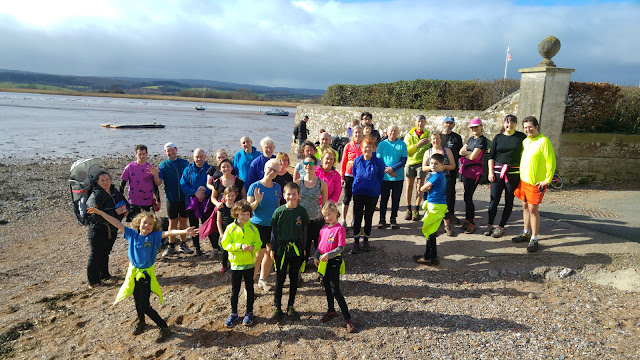