Showing posts from June, 2018
Show All 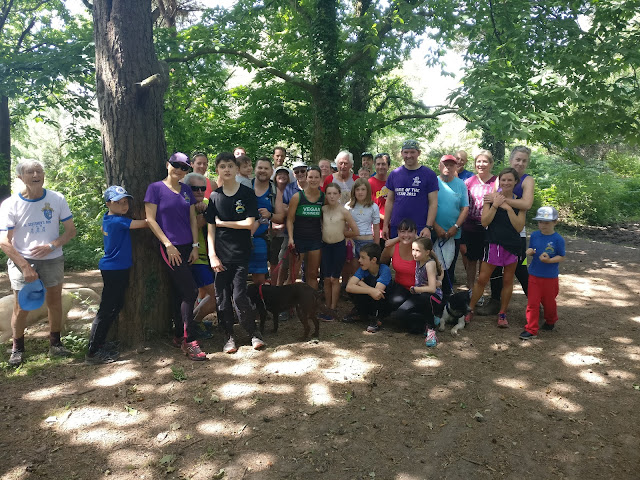 After last week's cold and drizzly affair, the sun was back this week, with vengeance.  But the Four Firs car park was excessively busy.  The trail took us down towards the quarry-ponds where there was a long/short. Then up towards the woods, where we all thought we'd spotted the sweetie stop on a distant hill. But it wasn't!  Woof Woof was voluntarily doing fish hooks (Woof-ooks apparently - be carefully how you say it), and then on to the sweetie stop in the shade beneath the trees.  By this point, and to our surprise,  hash-virgin 'Emily' had caught us up This was most of the way round - the last part of the trail ran parallel to the Yettington road, back to the (slightly quieter) car park.  Fines went to Miss Peaks for falling over again, Woof Woof for anal references, Bull Bait and Child Catcher for letting Stingray out with shoes that were falling apart, the hares for not wearing orange t-shirts, and Spocky for not giving the orange t-shirts to the hares.
Post a comment
Keep reading 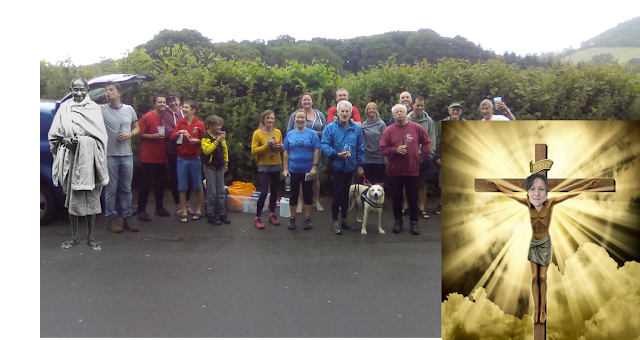 Where has the summer gone?  A second unseasonal hash laid by Strapo and Swampy - the last one with unexpected precipitation was the one in March cancelled due to snow!  It was pretty drizzly, but Strapo promised a trail shorter than his last one (the 6-miler at Otterton).  We headed towards the Bowd Inn, then down one of the footpaths into to woods, We ended up on the 'red route', where Stingray took a short cut, but face-planted into a bed of nettles.  A long loop followed, including a sweetie-stop that the front runners managed to miss. Quite a lot of confusion with marks on both sides, and arrows pointing to crosses... but we all managed to get back, although the sweets were missed!  The circle in the layby, with the usual fines, including Stingray, Twin Peaks (for falling) and everyone who didn't see the sweetie stop. Then back to Strapo and Swampy's house for a BBQ.  'Divs' like Bull Bait and I didn't bring jumpers, so we were a bit cold.  The wood bu
Post a comment
Keep reading 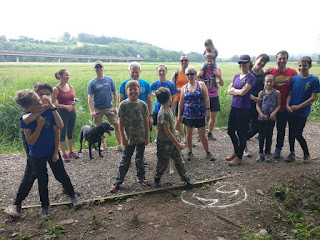 A humid morning's trail from Kingsteignton around the houses of the town, and then up to the racecourse with a sweetie stop on the cycle path on the estuary.  Then through the Passage House, along a field of wheat, and over the Teignmouth Road.  The excitement of the trail was after running along a footpath in field of sheep.  The landowner tracked us down and wasn't too pleased that we worried his livestock (despite us walking, and the one dog being on a lead!).  Back over the A380 and on home.  Thanks to Wide (and Tight - in her absence) for welcoming us to their home and providing some lunchtime snacks.  It was also great to see Fancy Licker, Tearaway, Armless and friends back - after what must have been a year!   Don't forget to Rate the Hash ! Next week's trail is a  BBQ Hash starting from Bowd, layby on A3052 (SY104898, map ), and then back to  Drakes Avenue, Sidmouth EX10 9JT. The following week we are at the Four Firs car park on Woodbury Common, hared b
Post a comment
Keep reading
More posts