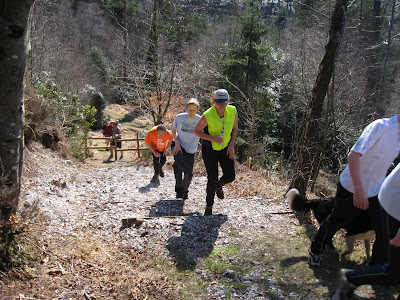 It was a lovely sunny day and on Mothering Sunday our hare Groucho had promised the 'mother' of all hashes! Well it certainly started in true Groucho style.....we all parked in two different car parks......then we started and it was ON ON to the first long - short split.....where the short was longer than the long!!
We then crossed the road and on to check. A distinct lack of flour was then observed and we had to rely on the hare to point the hashers in the right direction. Spocky Bitz was in flight and leading the hash into the woods and as we started to spread out the familiar call of the Woodpecker was heard bringing up the rear (a welcome return Mr Woodpecker!!).
A few checks later and the hash was lost in the woods once more......but with a bit of help from the Hare the trail was picked up once more and it was ON ON to the swampy bogs (or the deep rain-forest as X-Bitz called it). Normal hashing service was now resumed as clean trainers became a thing of the past!
A steep hill climb, a long - short split and few fish-hooks later and we arrived at the Sweetie Stop. Today the Hare kindly provided biscuits to go with sweets. The sound of Howling Wilf explaining the meaning and origins of the word 'chivalrous' was the incentive the hashers were looking for to get moving. ON ON!
Through the woods and on to check at the track. Looking good we all thought until one back check later we again encountered the theme of the day......R.U....lost??? 10 mins went by before the call went out....ON ON!! At last, someone had found the trail and the way up through the woods to the re-group. Howling Wilf provided the group with his second interesting fact of the day....Seaguls can't burp!...and explode upon consumption of bi-carbonate of soda! (or something like that!!). This proved enough for the hashers once more and an eager ON ON call went up before he went for the hatrick of facts!
It was up hill from there as the hash twisted and turned through the woods on their way back to the car park...pausing briefly to admire the wooden carving of Groucho outside the 'Go Ape' hut!
Back at the car park and the circle was formed where we held another naming ceremony - this time for three people. Congratualtions to Pebble-Dash, Whiplash and Fla-syd.....enjoy explaining your new names to everyone that asks.
There are still 25 places to fill for the Autumn gathering (yes - its in the autumn!) so deposits to Groucho if you are interested. ON ON