A six mile trail around Ide this morning, and it was cold again, but not wet like last week. Although a little bit of ice on the ground.
It started off with a little bit of fun and games with the parking, and despite Facebook, WhatsApp and messages in the circle list week, some of the pack arrived on the wrong side of the bollards, (the physical ones, not the Harriette... You certainly don't want to get on the wrong side of Bollards!), with Tampa parked away in the village itself. Anyway, Wide and Tight got it right, but by the way they flashed their lights when they arrived, it gave the impression that they were perhaps thinking they were doing something else in a secluded location...
After welcoming the pack, Tight announced that we have no hares after next week, so please volunteer!
Then off along Doctors Lane to the Twisted Oak (where we met Tampa coming the other way), up a footpath, and that's when the fishhooks started. They were a major feature of t r*n, perhaps more fishhooks than checks!
Then back down again for first regroup (again plenty of these today) and across an icy field, to almost where we had been 15 minutes earlier, the Twisted Oak, for regroup #2. Wide went off exploring around the streams by the pub, and as Tampa told him not to get Harry (the dog) wet, Harry jumped in the steam. "I had nothing to do with it!" said Wide.
Then over the bridge (not the tunnel) to the other side of the A30, and a long short split, with the shorts going straight through the village and up to another regroup. Up through the churchyard to the new playing fields, where Wide decided to see how far he could get across a big iced up puddle. Exactly half way it seems... Before he splashed into the cold muddy water... Luckily only a few inches deep. The longs were 'invited' to r*n round the playing field, which the clueless ones did, in opposite directions. Then rejoining the shorts we headed up on to the disused railway line to a tin roofed Sheppard's Hut where we had the sweetie stop.
After this, the pace slowed, hoping that we were more than half way round (we were!). There was a steep downhill, where Son of the Bitz slipped, a bit of road, then an almighty climb up the other side of the valley, to another regroup. At this point  Blobby told us that he'd been laying the trail since 7.30am!  Unsurprisingly he was tired!
Then it seemed we were nearly home, but Blobby had a nasty suprise because he didn't want us to use the downhill track to the cars as it was too icy.  Wide, Wilf and I decided to try it anyway, anf despite a little slip from me, it was fine.  The alternative route on the road turned out to be much worse, and longer.
Eventually we all returned, and thanked Blobby for an excellent trail, despite it being gone 1pm!
Please don't forget to rate the hash! https://cityofexeterhhh.blogspot.com/p/rate-hash_3.html.
Next week we're at the Rec, in Newton Abbot https://maps.google.com/maps?hl=en-GB&q=Rec%20Club%2C%2016%20Marsh%20Rd%2C%20Newton%20Abbot%20TQ12%202BA%2C%20UK.
After the trail there will be a Extraordinary General Piss Up to agree/ discuss the hash's constitution. See here https://cityofexeterhhh.blogspot.com/2023/01/notice-of-extraordinary-general-piss-up.html?m=1
And don't forget to volunteer to lay a trail! 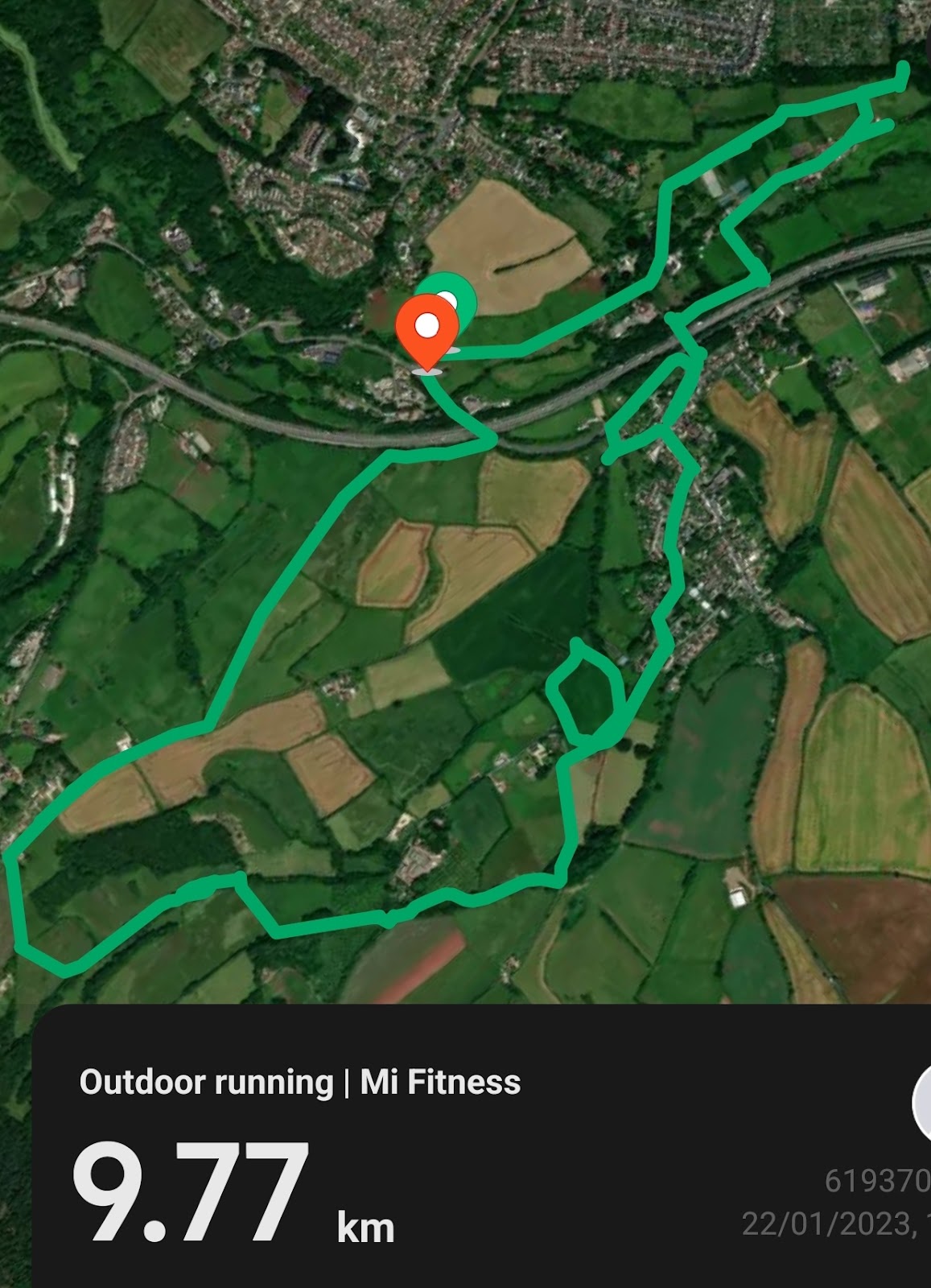 It started to get dark just after we arrived at Blackborough Woods, and then it started to rain. Later on that rain definitely became more like wet snow.
No Wide this week so Howlin'Wilf took charge, either welcoming Taunton as guests to City of Exeter hash, or the other way round. In the end we decided it was joint.
With the rain coming down, he handed straight over to the hares. They had laid a three and on trail in sawdust last night, and it was getting dark and didn't know whether they were going to get out of the wood, with puddles that nearly went over the top of Paperwork's wellies. Although that serves him right as who wears wellies in the hash? Most of Taunton H3 it seems...!
It was always going to be a soggy and shiggy r*n, so no point staying away from puddles. But the deepest ones were left until last. We had green paths, forests, green fields, and moss laiden undergrowth to enjoy (endure?). Taunton's 'Ron' seemed to be at the front much of the time. But I soon learnt that there's no point shouting 'Are you' as he's deaf.
I didn't get chance to take a hash flash at the sweetie stop as the pack had moved on while we were hearing about Spocky's new Jag. And it was soon after that when Paperwork seemed to have joined the WI's walking group as he was at centre of a lively discussion about whether the long was longer than the short, with him saying "all I can tell you is that the long in 5 miles and the short is 4, work it out for yourselves".  Soon after that he had a spectacular slip, given the skid mark on his back. But noone saw it apparently.
We had a City of Exeter only circle at the end of the trail (which was good because we were low on beer!!) and the hares were thanked, but no down down because Bollards was cold and Speedy had to end the circle quickly!
On on to next week when we're at the end of Doctors Lane near the Twisted Oak on the Exeter side of the A30 near Ide.
Don't forget to Rate the Hash https://cityofexeterhhh.blogspot.com/p/rate-hash_3.html?m=1.
And please pay your annual subs if you haven't already done so!!

Just some photos from hashes over Christmas and New year.
New year's day 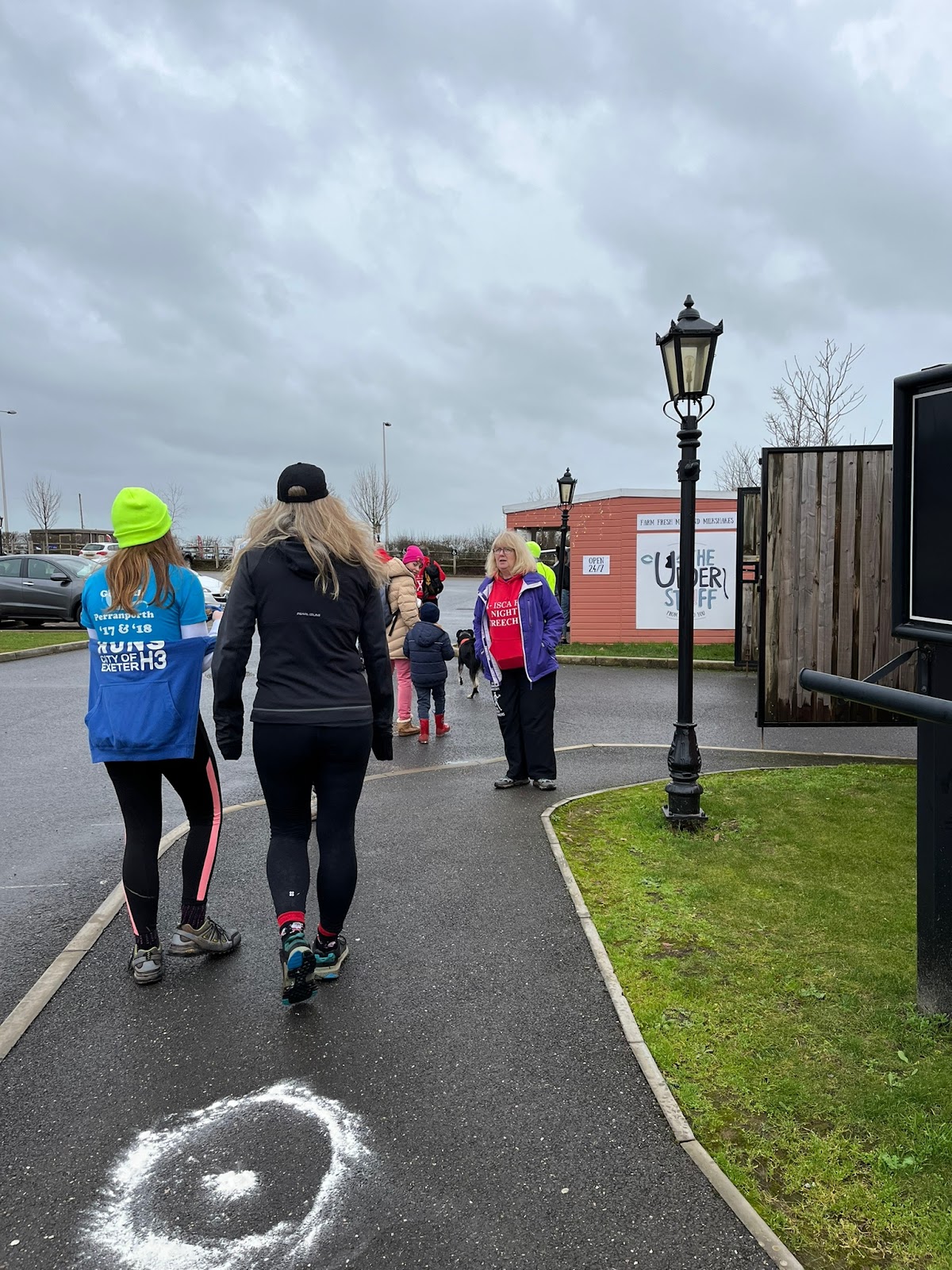 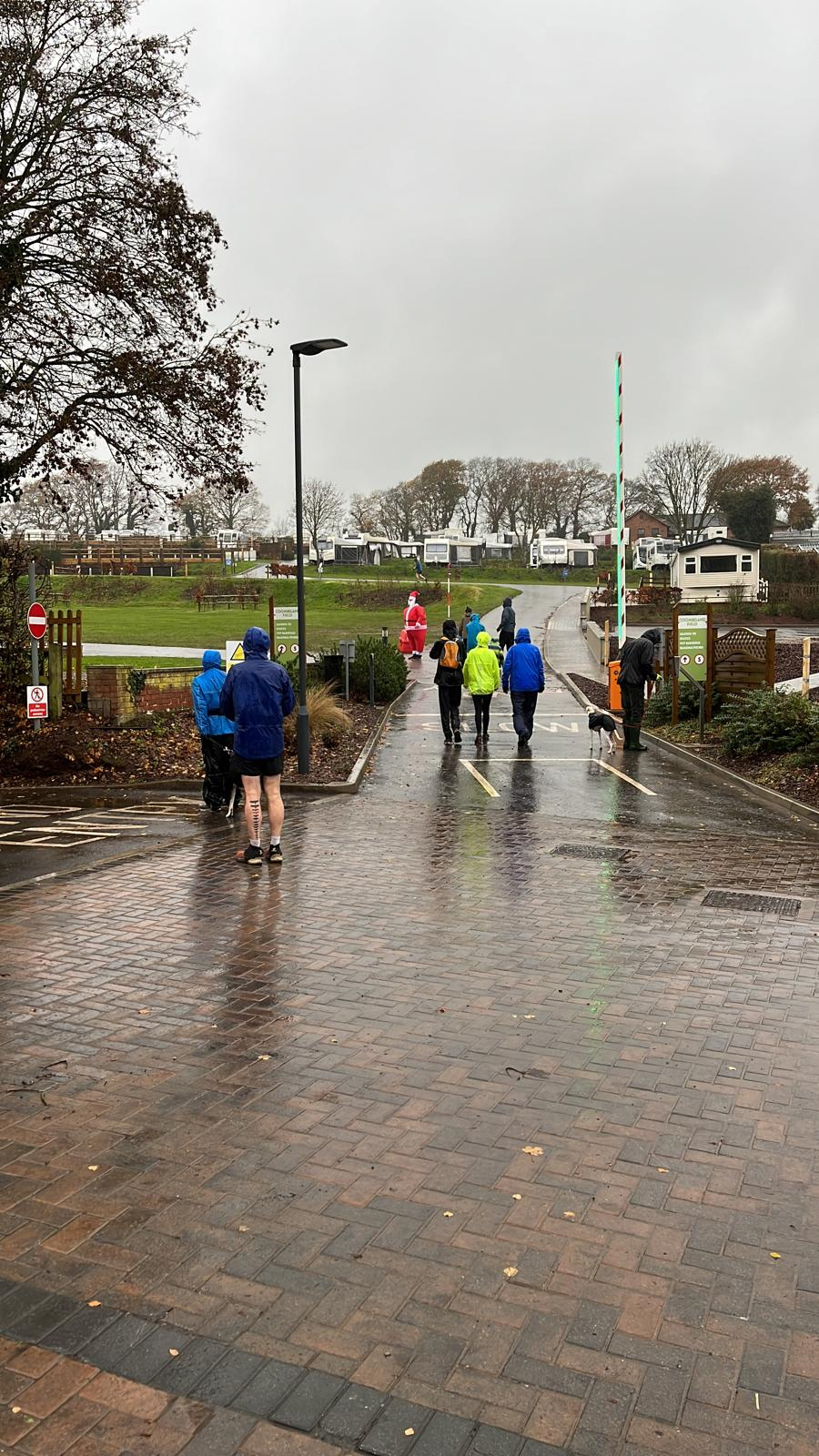 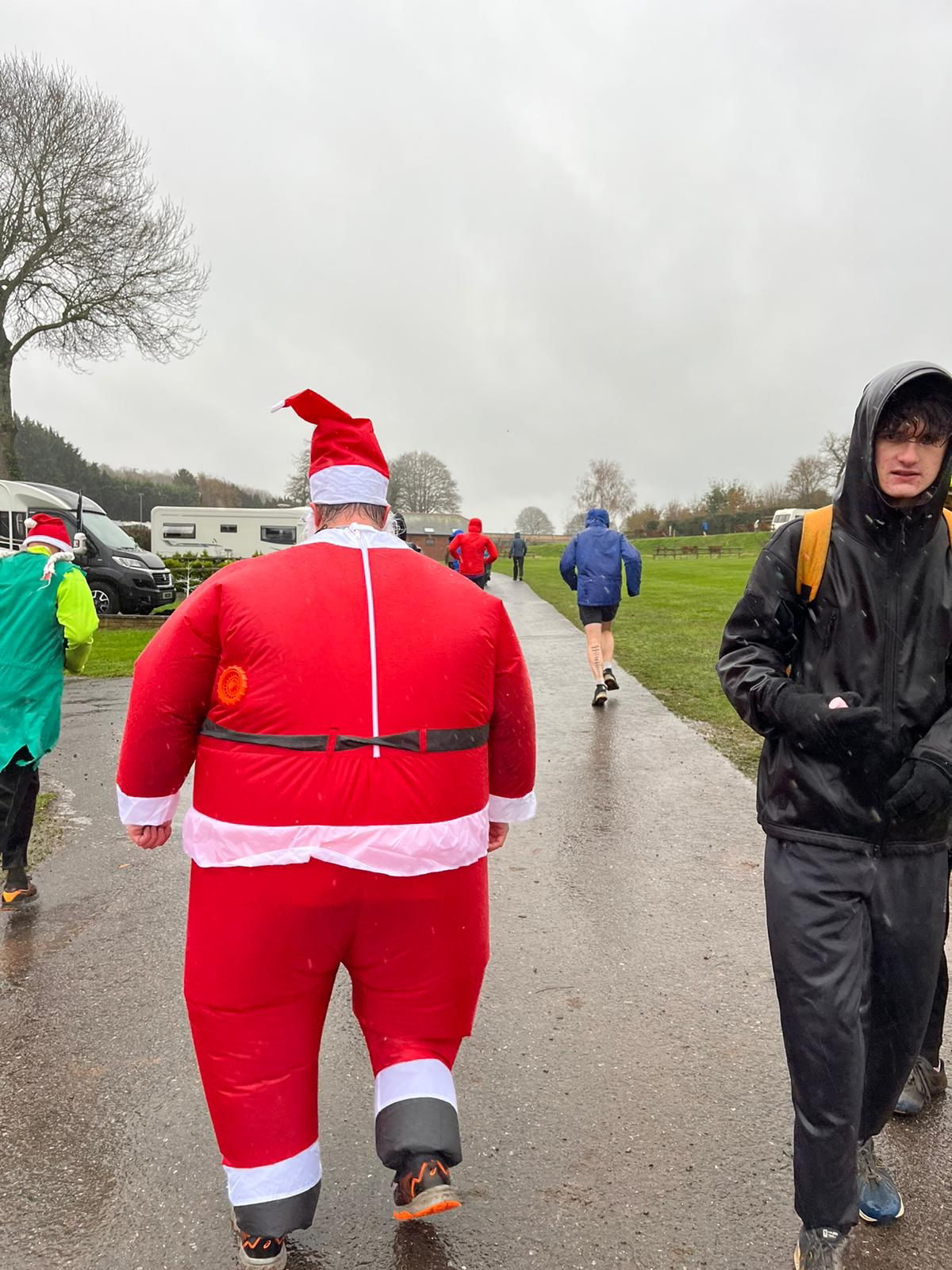 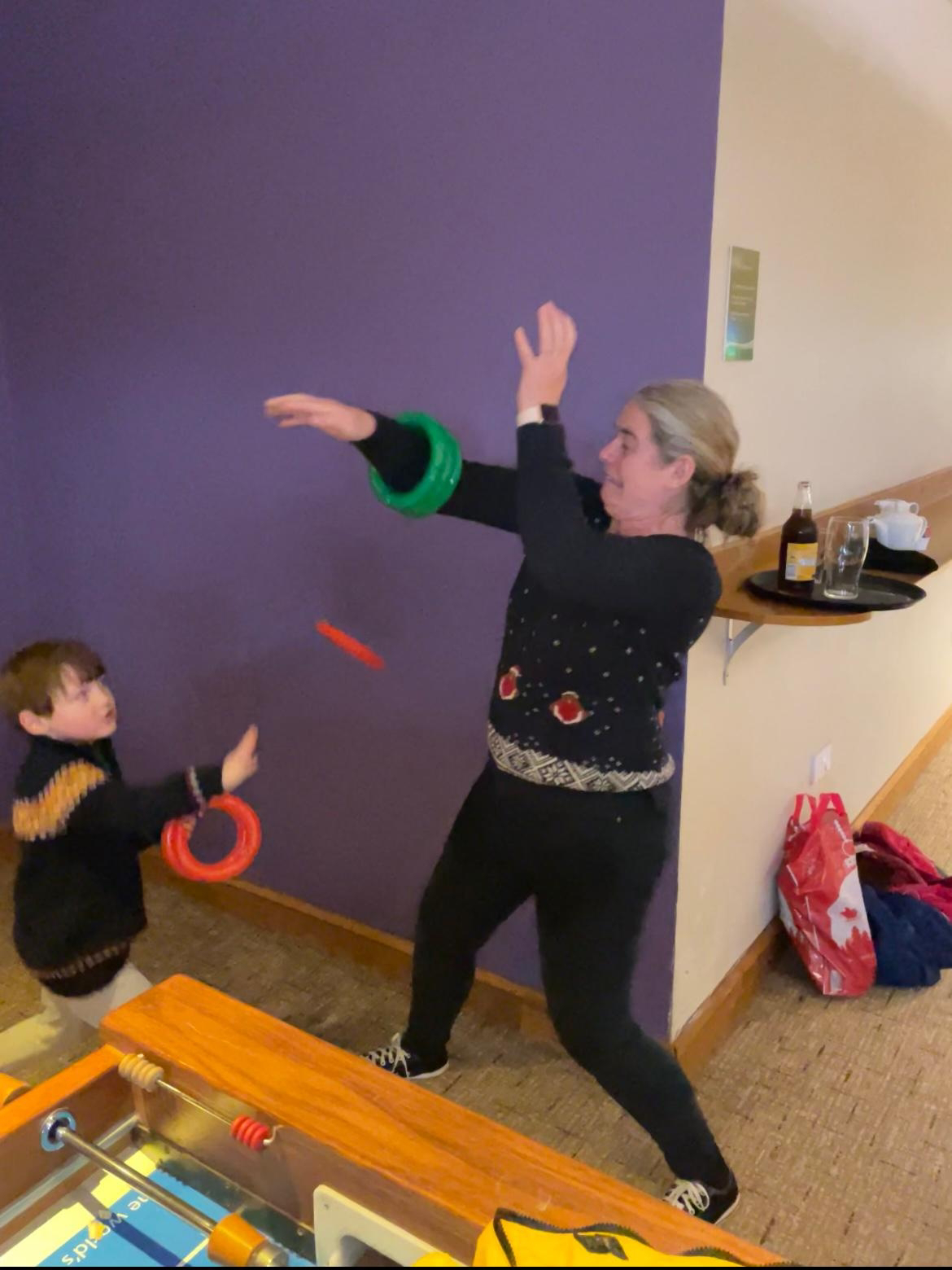 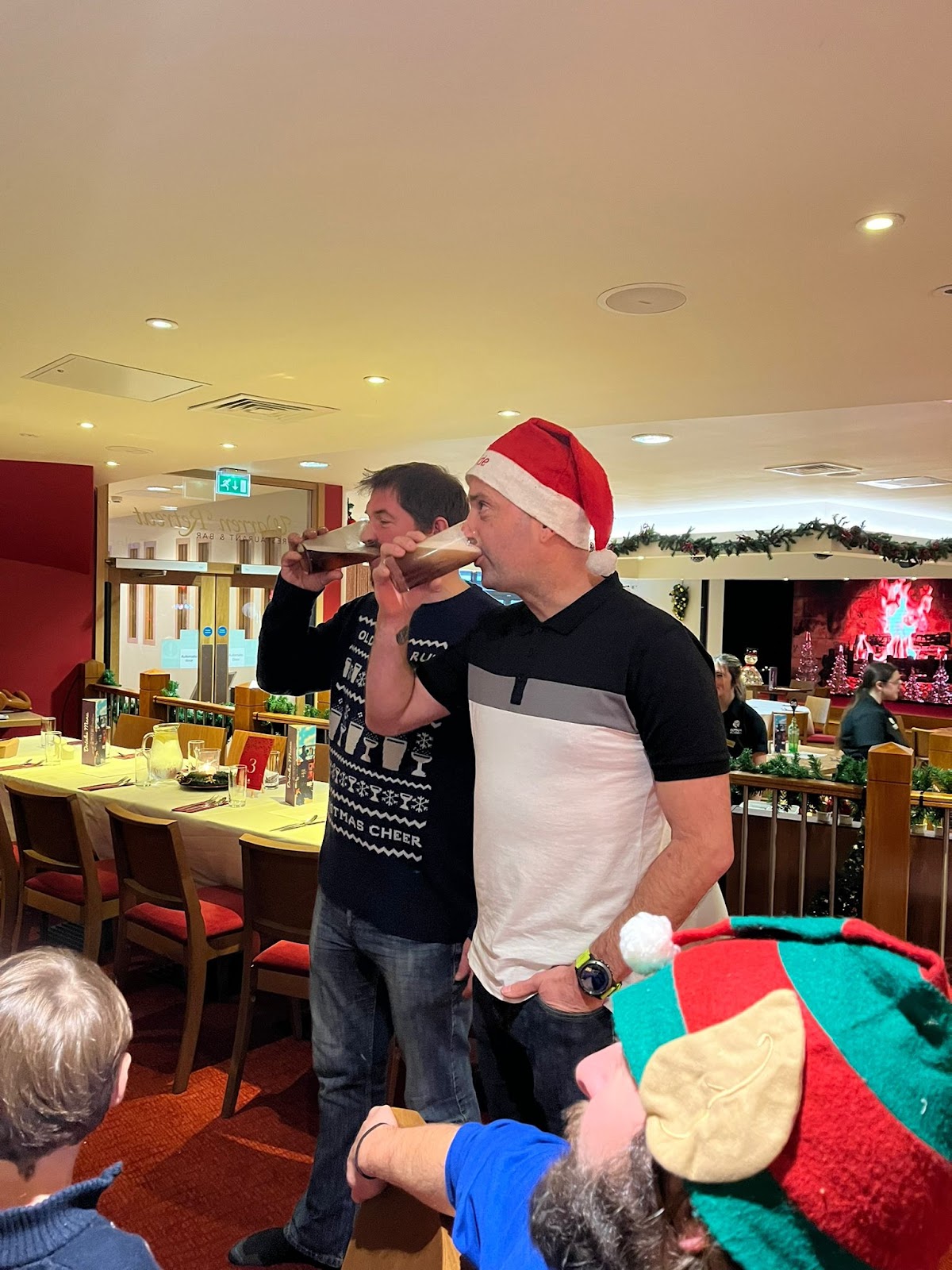 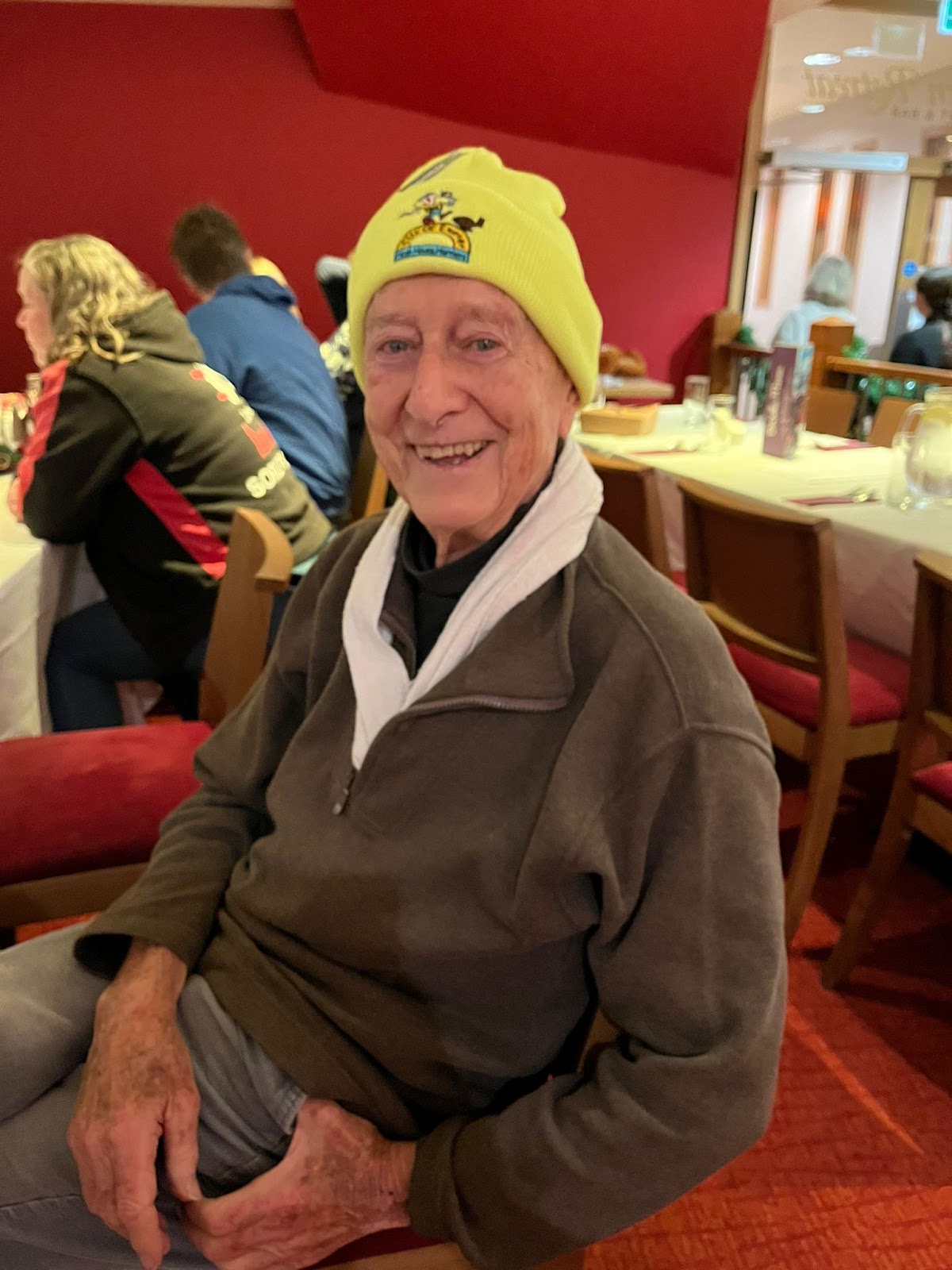 It was so cold this week that Wide had to wear a hat, but the problem was, he didn't have one. So he borrowed something from Puss...

A little French fancy I think.
I was very excited to give Wide a microphone to welcome the hash, problem was that it wasn't loud enough, and I'm not putting it anywhere close to my lips now that I saw were it went just a few minutes before this photo was taken!  Our hare was also slightly bemused about what to do with it...

The trail took us to parts of the common that I didn't recognise, and was extremely muddy (who'd have thought it...).  Although we started off in familar territory, with lots of loops to slow us down, before heading down off the common towards Stoneyford on the roads and tracks, before heading back towards Hawkerland.  There we had the sweetie stop, with the hash flash around a big puddle, which Son of the Bitz enjoyed standing in...

... Although I'm not sure he enjoyed what happened next... Which was amazingly captured by Happy Snapper! 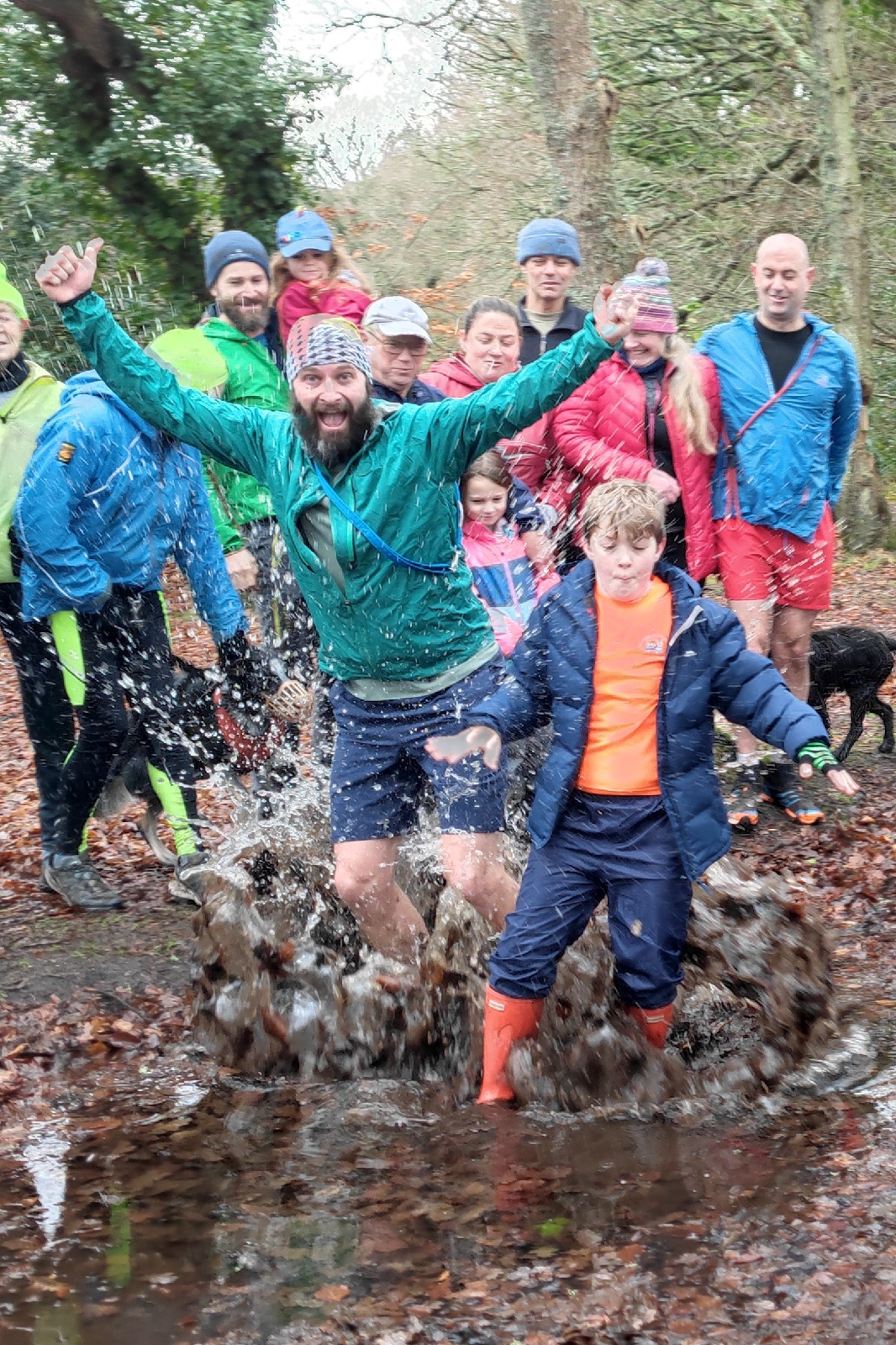 From there, there was another long- short split, with the longs continuing around the edge of the common along a wooded path. Bollards and me almost managed to loose the trail after an ambiguous (kicked out) mark, but soon spotted our error and we were back on trail on the common proper, with just  a few loops before heading home. Very pleased to see Woodpecker at the front of the shorts on the way home, and it's him that we blamed for cutting out the last loop on the trail as we were simply following the FRBs!
In the circle, Speedy was our Sheriff, and tried togive me a down down for the microphone, but it went instead to Spocky and Boots for splashing at the hash flash (and upsetting Son of the Bitz).

Next week we're at Blackborough Woods for a joint trail with Taunton H3.
Please don't forget to RATE THE HASH this week and for last week too, if you haven't already!
Also please pay your annual subs if your haven't already... Details are on the WhatsApp group or message me for a payment link or pay next week by card. If you're not on the group and want to be,  see here.
Finally we are encouraging everyone to register their contact details with emergency contracts etc. Unless you've already received a message from me this week, please add your details here.