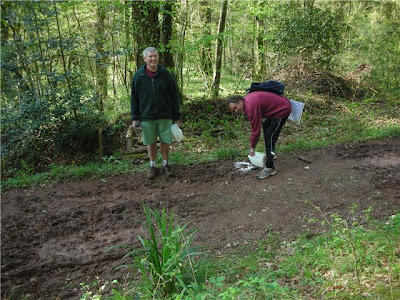 It was another sunny day that welcomed the hashers at Ashclyst Forest with Groucho as the hare. The words "forest" and "Groucho" in the same sentence should give you an indication of how the hash was going to fare!
A cosy turn out of 11 hashers but despite this there was an abundance of nonsense as usual. The pre-hash conversation was launched into confusion as Tail Lamp initiated a random conversation about it being the longest day of the year. Twin Peaks had to point out that this wasnt until June?!
Spocky Bitz mentioned he was planning a trip to Thorpe Park to which Tail Lamp again confused the group asking "oh - are you visiting Thorpe Park today?" Umm, no, it's in Surrey so that may be a tall order as Spocky was still in Devon at 11am? How long did Tail Lamp think the "longest day" is? It was certainly going to be a long day for Tail Lamp.
On this note, Groucho called the hashers to "circle up" despite the fact that the group were already in a circle? Twin Peaks was standing in as deputy sheriff and was having no trouble in keeping a mental note of all these misdemeanours to hand out some fines.
On On was called and it was off through the forest. Paperwork was off to "check it out" and returned announcing there was no flour to be found. This was the source of yet another fine as he was checking blind and had completely missed the large dots of white flour?!
This was all too much for Paperwork who decided he needed to take a break out of sight to..... "do some paperwork"!!!!!
In the absence of serious competition (Radiohead was in France although rumour has it he has abandoned the hash), Spocky and Stat-Nav were the FRB's and Stat-Nav soon encountered the first of several fish hooks.
The trail meandered through the woods and in places was notable for it's absence. A few encouraging "on called" hints from Groucho and the hashers reached the sweetie stop. Again Groucho had exceeded expectations with a selection of biscuits and jellies. This was to be our first encounter with "normal people" where a little girl took delight in telling us she was following a "pink" trail in the woods. All hashers agreed she was probably having more luck than we were with our trail.
On On in the sunshine and another spell through the woods. We met the main road where confusion reigned as Spocky and Stat-Nav missed a back check and led the hash astray. It's a good job Groucho was available to keep us on track.
At the long-short split, all hashers opted for the long which must surely make hash history. Unfortunately for the hare, this also meant he had to run it for the second time! Twin Peaks and Chesty were showing no signs of slacking despite partaking in a 12 mile night walk for charity the evening before.
Before we knew it we were "on home" where the hashers gathered in the sunshine for hash refreshments. An unusual selection of Beer and Bon Bons.
Twin Peaks handed out fines for Paperwork and Tail Lamp for reasons specified, Tampa for arriving early (he has now been nominated for a weekly standing order), Spocky and Bell-Toll for reasons unknown. Stat-Nav was fined for changing shoes in the circle which he protested on the basis he did not know this was a hash rule. For this abuse he was alloted a further fine for not keeping up with hash rules. Bag Lady disputed a fine for pre-hash peeing and only Sore-Point and Chesty escaped unfined!
Next weeks hash is at Peak Hill car park, Sidmouth hared by Slip Shod.