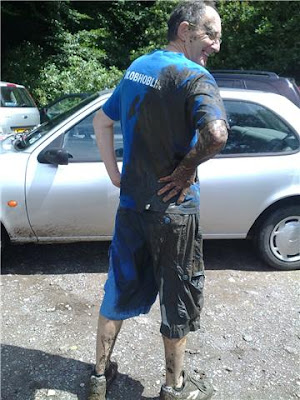 Well, what can I say, where were you all comes to mind?

Two trusty hares waiting at the car park with only Baglady for company. Shortly after 11 up turned Blobhoblin, then a visitor from Taunton, dotCom. So, three hashers, two hares. Mmmm. There was then a bit of excitement as a van towing a banger car couldn’t get up the hill, making plumes of smoke as his wheels turned to no avail. DotCom helped him get on his way and the stream of traffic backed up behind could move on. This must be the rest of the hashers we said. No, it wasn’t. At 11.15 we thought we’d better set off and who comes screeching round the corner – Twice Daily with Pebbledash and Runs Again on board. Hooray! In one car they had doubled the pack.
Deciding not to wait any longer, off we went on a perfect trail through the woods. It was a perfect run, even if I do say so myself! Well, no-one else wanted to do the blog so I may as well blow my own trumpet! It was decided to call an amnesty as there was no sherrif, no GM, no anyone really, and what is really bad is there was NO BEER MASTER! Who had the beer? Why was it not sent along? How could we impose the £1 levy if there was no beer and peanuts? This also meant no fines so nerd names were used without penalty and a very fine time was had by all!
With a packet of sweets each at the regroup off we went again. Blobhoblin decided to roll in the mud – not sure why – perhaps he felt like a hippo and wanted to cool off? Photographic evidence has been obtained. After just about the hour we returned to the car park, trail found and run and the rain had held off too. As we had no beer we had no circle, but Twice Daily came to the rescue with just the right amount of brownie squares that she had in her car for just such an emergency. Wonderful! Thank you for the few that came, it was very much appreciated by the hares – and to the rest of you – you missed a very nice trail!!!
On On. Sorepoint
NB. Has everyone died of swine flu??????? ED.