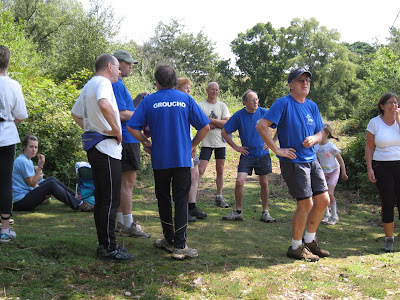 What a hare that Spockybitz is, not only does he lay an excellent trail, except for the bad bits, but he also trawls in 27 fellow hashers. Does he have a fan base? (No, just luck - ED)
It was nice to see Mr Woodpecker, late as usual of course, no change there then, a guest appearance from Radiohead and also so many junior hashers, indeed a very good turn out.
Whilst in the circle prior to setting off, Groucho announced that he had lost his inhaler which had been in his hand one minute earlier. Whilst the pack looked for it, he found it in the boot of his car, he was of course fined.
Fitfteen minutes into the run, a new hasher made a fatal error by informing a few hashers that he had not seen a blob yet, he was fined for not being focused on the hash. We plodded on running in a lovely shady environment, thus Spocky had a happy pack of hashers, not exposed to that rare event, hot August Sunshine, in fact we were kept in the dark most of the time. We had several uneventful long short splits before arriving at the sweet stop. The goodies were wolfed down in record time, all the while we were being observed by wild ponies, the hare then inviting the more alert members of the pack to "take in the views". Next we were off again by now travelling at a slower rate of knots due in part to age, tiredness, eaten to many sweets and of course chatting. Several more long/short splits came up, with, by now, more of the pack taking the short route. Finally came the hill that sorted any true hasher out.The true hasher took on the hill with some relish, which was extremely steep, enriched with mud and with nothing to hang on to. However there were a group of hashers who did not want to enjoy this enriching experience, they were of course fined.
Back at the circle once more fines were collected by the acting sheriff, one Tuned-In , she does need to go on a diet you know, she can't see the end of her trainers now, (do you like hospital food Groucho???? - ED), drinks and refreshments were taken before we all slowly made our way home.
On On to Joneys Cross next week.