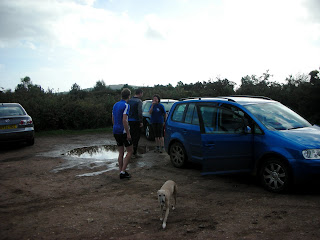 What an eventful day today would turn out to be and that was before we were to even leave the safety (!?) of the car park.
Howling Wilf had not been confused by the clocks changing this time and had also laid on some lovely weather for us. A few hashers seemed to be there very early...had they got out of bed too soon we wonder?? By 11am there were about 30 hashers gathered eager to find todays trail. Groucho circled us up to give us an update on his missing glasses saga. Then out of the blue came Up Yours racing into the car park, pulling up into a perfectly good parking space. This appeared to be too simple for us hashers....it must surely be made more difficult than that?? She reversed out of said space, fancying Stat Navs space much more, she chose to reverse straight into his car. But alas.....it's not his car....it's Chestys, good luck with THAT one then!! Poor old Chip Shop just stood there looking dumbfounded while Stat Nav was still drunk I think or at the very least hungover, so didn't seem to say much.
When attentions were finally back to the hash circle, C of E virgins were introduced. One hasher when asked by Groucho what his name was, duly replied, J Y Kelly, only for our sweet and innocent GM to reply, 'no, I mean your hash name!!!'. DOH! Maybe the monies from last week would've been put to better use for Help The Aged, not the NSPCC??
Well all of this and we had yet to leave the car park. Howling Wilf gave us our instructions and off the pack went. The hash, being in shock, struggled to find the trail initially before Twin Peaks called on on, while Groucho wen t back to his car, unsure whether he had locked it or not (was he just moving it well away from Up Yours we wonder???).
Over the road we crossed, through the forest, meeting up at a check where Odd Bitz and Tuned In were waiting. Stat Nav found the trail while Radiohead fell in a gorse bush. Did he fall or was he pushed? The hashers ended up near the assault course tunnels before splitting up on a long, short split. It was nice to have Twin Peaks back on the hash and her moaning could be heard from Yettington! The two packs met up after a number of steep hills for a sweetie stop. Todays delights were, jelly babies, fruit pastilles and liquorice allsorts. Suspicious hashers are now beginning to believe that Tuned In isn't actually pregnant but just eats a lot (Radiohead likes hospital food - ED).
On On over the road back into the forest and on to another long, short split. Having arrived at the split early with the FRB's, Stat Nav was concerned that if he was to do the long there may be no takers for the short and was most upset that Howling Wilf would've laid a perfectly good short trail that no-one would see. Twin Peaks however, convinced him that it was in his best interest to go long. The longer he stayed out on the hash, the longer the delay in telling Chesty about her car!
Finally the two packs again converged, with Jaws looking a little the worse for wear, I'm not sure his little legs were keeping up so well. Everyone headed back uphill, through the forest to the On Home where we headed back into the car park ready for the fines.
Predictably, Up Yours was fined for her crap driving....not only fined but deportation was ordered too. Groucho was fined for being a bit simple. millie was fined for trying to cause a road traffic accident (must have been taking tips from Up Yours) and Radiohead was fined for.......I don't know, just being there I expect! The pink handbag was also awarded to Up Yours who will not be reminded of this day for many hashes to come!!!
In all the melay, the fact that it was Odd Bitz birthday got overlooked, so many happy returns to you Odd Bitz, hope you had a good day.
Also well done to Howling Wilf for a great trail and lovely weather too!
On On to next week just down the road at Four Firs. In the interests of health and safety, please park in the second bit of car park as we understand Up Yours will be parking in the first bit of car park as you drive in.