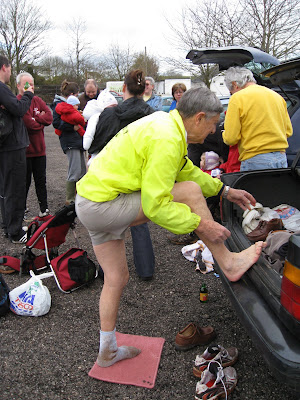 We all gathered at the venue,we being 15 of us, but we didn't get away until gone 11.15 hrs as we had to play a game called car shove up in other words we were asked to create more space for footballers etc to park, as luck would have there were no vehicle scratches or dents involved with these extra activities. Woodpecker arrived, late of course fresh from his holiday only to inform Groucho that if he was a six cylinder car engine he was only firing on three of them. What sort of an holiday had he been on?!
At last we were off with Spockybitz and Stat-Nav setting a blistering pace only problem being they were going the wrong way for the first three checks. The mother and toddler group were to be found at the back for most of the way, no doubt talking baby tactics and exchanging children friendly tips. The pack had the pleasure of running over part of a golf course, by kind permission of course, Tampa managing to find a golf ball which was his pride and joy until he spotted a target, Groucho, well his pink hand-bag to be accurate which Tampa's shot was not. We enjoyed a steady climb up a steepish hill with an orchard on our right, when I say we enjoyed the climb, some didn't, namely those who found a series of fish hooks.
From the top of the hill the pack enjoyed munching the sweets, once they had found them, whilst taking in the view overlooking the hamlet of Shute.
Horny Women was heard to ask Groucho if he had a hard one, the pack reassuring Groucho that she meant hard sweets. Once we set off we indeed headed for Shute where the pack separated on a long/short split.The shorts now soldiered on for a good 15 minutes before the longs had caught with up them. Spockybitz leading from the front of course, Stat-Nav and Fruitybitz were some way behind with the 'three working cylinder' Woodpecker sweeping up at the rear if you take my drift. The sheriff had now taken a liking to the mother/toddler group becoming an active member by relieving X-Bitz of Itsy-Bitz this giving her a chance to run, X-Bitz that is.
At the last hash halt we waited for Woodpecker, no sign of him though suggestions were made that he was now firing on one cylinder. Good hasher that Spocky is he offered to hunt for our hash hero Woodpecker and as luck would have you readers will be pleased to know that he was found. Finally it was into the last furlong with all of the pack arriving in various states of wear and tear.