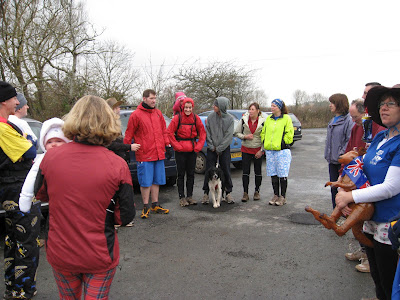 The forecast was for gales, sleet and rain. We actually came off quite lightly, as the 20+ hashers gathered in the car park it was just windy, but dry. This was the only part of the hash that could be described as dry! Almost everyone had suitable fancy dress, albeit a bit obscure by some people, others in full attire wigs and all! Horny Woman even had her pants outside her running tights, did she think she was Wonder Woman?
Stat Nav explained about the trail, all the usual, long/short splits, fish hooks, sweetie stop and we were assured it was a lovely clean and dry trail????!!!!
Eventually, we managed to get away, only to have Howling Wilf stumble at the first hurdle and had to hobble back to the car to take himself home, poor Welly had only just got ready to run.
With X-Bitz and Tuned In taking Itsy and Radio Ga Ga on a shortcut, the others started throught the first bit of clean, dry trail. On on through some boggy marsh land and Spocky appeared to the walkers as they came up to a check. On on was called taking up into the village of Exminster, getting us a few strange looks as we ran through.
Here Horny Woman and Down Below caught up with the walkers (how does that work then???) and we went on over the railway bridge spotting a 'Crocodiles - next 20km' sign! It was here the real fun and games started. The longs went off around the marsh, I hope they didn't manage to escape them though? As the shorts went straight through the middle! Both Itsy and Ga Ga almost came a cropper as X-Bitz and Tuned In got their feet stuck in the bogs. Poor old Jaws had a time of it, almost drowning on a couple of occasions I think. At one point he decided enough was enough and Down Below had to go back and rescue him. Stat Nav saw the walkers safely to the other side, only splashing cow poo on Tuned In twice!
Almost at the sweetie stop and Sorepoint is heard bellowing accross to Stat Nav 'which way are we going', luckily it was easy for them, 'follow the path' was his reply. Fruit pastilles and other sweets were greedily munched and the longs set off down the track, only to run back to us shortly after that as their trail sent them back off into the marsh.
We were offered a choice of a shorter run back to the car which was very wet or a slightly longer, drier route. No prizes for guessing which route the walkers took. Odd Bitz joined the knitting circle for a little while to tell us about the previous days A2B hash then tootled on his way again. Radiohead ran back to check on Tuned In and Spocky appeared too to help X Bitz. After what seemed like forever, we arrived back in the car park which had filled up somewhat.
Down Below was awarded a t-shirt and given a down down to send him on his way, the sheriff awarded fines to any non fancy dressers then we all scoffed various Aussie themed fairy cakes, Aussie flags on the top. Spocky had thoughfully brought a flask of coffee which was greatly appreciated by some very cold and wet hashers.
On On for a roast dinner in the pub for some of us.