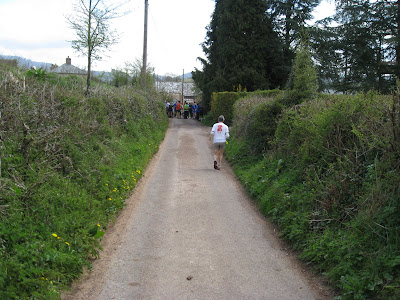 On arriving at the car park on this somewhat dull day, most of us had to do laps of Newton Pop to find anywhere to park. It would appear some ramblers had chosen this as their rendez-vous point too.
Eventually we all gathered together though to receive our instructions. Stat Nav promised long/short/walkers splits, laid in flour on the right but sometimes left and most importantly, a sweetie stop!
On on we were shown, down past the church and onto a small path across the main road. Onto a check where Spud-U-Like was loitering waiting to hear a call. As we were called on Tuned In was seen to be overtaking Radiohead! He must be losing his touch!
We emerged out onto the country lanes to be greeted with a bit of a slog up a hill that seemed to go on forever. There was a fish hook here for 3 but as Radiohead was 4th they didn't have far to return. Onto a woodland trail now and the first of the splits. Twin Peaks, Sorepoint and Paperwork surprisingly doing the long after yesterdays half marathon....sorry, A2B. Also taking the long were Spocky and Wide Receiver, despite being 'with child' so to speak. However on the walker route were a few slackers.......named and shamed Horny Woman, Fruity Bitz et al! Poor excuses of too busy talking to realise!
The short route took a lovely path through the woodland with a couple of false trails and a back check eventually meeting up at the regroup with the skivers.....I mean walkers! We waited for the longs to catch up (what a satisfying sentence) and waited......and waited, eventually Odd Bitz and Sorepoint appeared, followed by Radiohead. Sorepoint suggested a point where she thought the others may have got confused then lost so Radiohead went back to round up our lost sheep. Once they arrived at the regroup we quickly called on on while leaving Radiohead to find Woodpecker.
After narrowly avoiding being mown down by some townie in his Chelsea tractor, we headed left into the fields where Twin Peaks, Paperwork and Twice Daily got stuck with the fish hook. This left Sorepoint and Tuned In setting the pace up the front! Sorepoint having a little inside knowledge of where the trail may go as it was the same territory as the A2B. On on we called past some horses and arriving at the sweetie stop.
Before Stat Nav had arrived with the sweets, Spud U Like, in her 3 tops, decided she was way too hot, can't imagine why????? So proceeded to strip off as needless to say, the long sleeved one she wanted to remove was the bottom one. Nudity on a hash can you believe it? Soon Stat Nav had arrived carrying little Radio Gaga and the sweets were dished out. No less than 4 bags today including minstrels....yum! Always good for point scoring that is.
On again to another long/short split where Stat Nav helpfully pointed Pebbledash on the long telling him it was the short! Runs Again thought this was hilarious and despite his best efforts to 'let him go that way' Stat Nav called him back. The shorts headed onto another check with Bag Lady and Fruity Bitz finding the correct trail closely followed by Odd Bitz. It was down this lovely little trail that Tuned In decided to perform her best Super Woman impression. However, I don't recall Super Woman doing it and landing flat on her back??? Stinging nettles do NOT maketh a comfy bed??!! After that excitement we all continued on to the trail adjacent to the river with Bag Lady striding out in front along with Runs Again only to come across a fish hook which sent them and Tampa backward.
While Tuned In played on the swings, Odd Bitz and Fruity searched out the trail which led back by the playing fields and on to the On Home. Back in the car park Horny Woman announced she was having a BBQ back at hers with all welcome to come, in honour of her 50TH BIRTHDAY, yes just in case anyone didn't realise it's her 50TH!!!
She was given back the pink handbag as it was pointed out she had tried to palm it off before she went to Australia, but it had waited for her all this time. The sheriff, finally back, fined various people for various misdemeanors then we all set off to the On Down at Hornys where we enjoyed a lovely BBQ, thanks Horny Woman and Happy Birthday, xx
On On to next week at Pines Ridge CP, Woodbury Common.