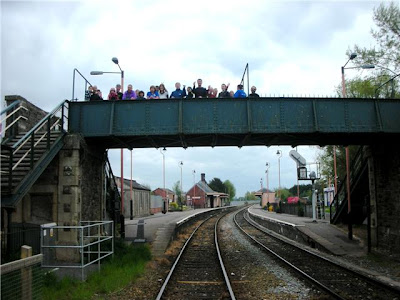 It was a tidy sum of hashers that gathered in the square at Crediton for Isosceles virgin hare hash, only one latecomer today, Horny Woman, tut tut. Instructions were given and welcomes were bestowed to visitors. Check it out and we were off ..... through the lanes of the town, a couple of hashers were seen to dawdle along window shopping, but were prodded and poked on by the hare.
First regroup was at the local monument where we were given a history lesson by the hare, every day is a school day. On on to the old school of the hare where we were told he lost his cap gun and a reward was offered for its safe return. Sadly no one found the gun, but we were told we were to follow the cross country course the hare used to run as a boy. Apparently he held the school record for the fastest runner. Off we went over fields and through gates, we could imagine outselves as kids running along in our gym kit. Indeed Dr Jekyll and Horny Woman exchanged musings about the horrors of navy blue knickers that were compulsory in their day at school.
Soon enough we arrived at a railway bridge where we were hash flashed and treated to the ever popular sweetie stop, however today was a cake and cookie stop .... yum yum :) however a MAJOR misdemeanor was seen to be committed by Blobhoblin .... he was in charge of several cakes (first mistake) and he was passing them to Spocky Bitz when he took his eye off the icing and dropped one of the cakes !!!!!!!!!!!!!! I ask you , could there BE a bigger crime??????
On On we went over fields and several fish hooks later we arrived at a long short split, the obvious went long and the more than obvious went short. Then we came to a BIG hill up a field that left Tail lamp, Groucho and one or two others breathless. The views were fabulous at the top so it was worth it, another flash was taken and off we went.
Many steps in the downward direction were laid out before us, Blobhoblin and Horny Woman discussed the problems of weirdly spaced steps that mean little people are unable to take them continually and have to go down one step at a time, so to speak. Before we knew it there was a sofa before us on the steps, was this laid on by the hare we wondered ? however it had seen better days and even hashers have some standards, so no one sat.
Then there was the last long short split and before we knew it we were all back at the square and waiting for Spocky to open up the refreshment tent when it was noted that Marshall Farts was missing, Wide Receiver went off in search complete with Free Rider on his back, Mr Hyde went off in search (well he is the lads dad!!!) with a frantic Dr Jekyll and dog running in the opposite direction. After 5 mins or so Mr Hyde and Wide Receiver came back with Marshall Farts in tow, apparently he wasn't lost, just unsure of the way. It was however another 10 mins before Dr Jekyll came back, as she had practically run the whole of the hash backwards, what mummies do when their pups are missing.
Quick fines were handed out, one being to Tail Lamp for being a FRB !!!! Fruity bitz for goodness knows what (she always seems to cop it) and the hare obviously x3. Off to the Three Little Pigs pub for a cheeky drink or a lovely roast depending on who you were. A grand job done by Isosceles no longer a virgin !!!