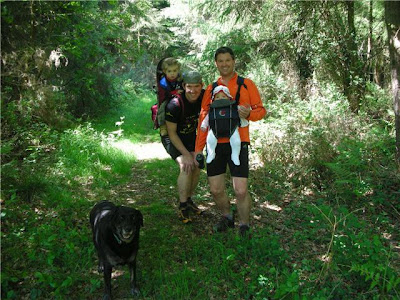 Stat Nav ordered a sunny sunday and obviously he has clout in high places as it was indeed a lovely sunny sunday. About 17 hashers assembled, including Up Yours and offspring driving a nice shiny red car ........ everyone covered their eyes and hoped for the best !!!! ........ will she EVER live the reversing incident down ???? her hubby Slip Shod and friend Howling Wilf arrived on two wheels and sweat ...... NO Woodpecker today apparently in Singapore. So we were off by 10 past.
On On to the common we went, as Radiohead was in the Lakes and Stat Nav and Spocky Bitz were both with child (Radio Gaga, and Itzy Bitz) it gave others to shine, however as the writer of this blog was towards the latter end of the group she is unaware who was actually infront. But she remembers seeing Boots in Puss and Slip Shod's rear ends in the distance.
Lots of fishhooks kept Bell Toll, Howling Wilf and Tampa busy, AND Up Yours getting a fish hook ??? then another, then another, obviously she's been eating runner beans. There was a streaker on the hash today, Boots in Puss went topless to the delight of Puss, Horny and X Bitz..... ding dong !!!!!
Soon we were hashing through woodland with the usual debris on the ground, and Ooooops Spocky Bitz was a faller, straight down onto his knees, thus avoiding injuring his little Itzy Bitz who was travelling piggy back. He did hurt his knees but was a very brave hasher and soldiered on, after checking Itzy was ok. Horny Woman offered to give him a thorough check over but declined when he saw her don her rubber gloves !!!
Sweeties were to be found along the stream, a hunt that appeared to take hours when in fact took about 1 minute revealed 4 bags of sweeties ... yes 4 bags !!! including Minstrels which were coveted by many a female hasher, ( i was going to say lady hasher but lets face it ?????) so munch munch munch and we were On On up a hill, and then down the other side that led to MUD MUD and more MUD.
The mud was not only muddy but bumpy too and had at least 2 victims, first was Horny Woman who sunk her right foot up to mid calf, with the accompanying customary screams then 30 seconds later her left foot went in but only to her ankle this time. This caused much amusement to Tuned In who nearly fell over laughing her usual dirty cackle. Next was Puss in Bootless who carried on her name by getting stuck in the mud. Her partner Boots was so concerned for her welfare he decided to knock her over but she dug in deep (so to speak) and refused to fall over.
On home was called, before we knew it beer and crisps were distributed, fines given out, mickey taking abounded and it was all over. Great trail Stat Nav bring on next week !!!