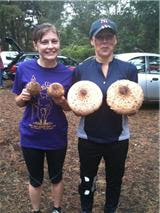 The car park was fast filling up, but no-one bothered to leave a space for Up Yours, as she so rarely turns up anyway, and what with Chip Shop cycling 1000 miles just to be at her door today, there seemed no point at all really! Free Rider was seen to be wearing her shoes on the wrong feet, perhaps she fancies herself as a ballet dancer and was practicing her turned out feet? Blobby thanked everyone for replying to his e-mails and invited anyone else who wants to score to drop him a line! Is this some sort of new dating site we should know about?
Woodpecker, covered from head to toe in flour as it had been raining when he set the hash, gave us a few wise words and sent us on our way over the road and onto the heath. Lots of backwards and forwards, up and down, shiggy, gorse, brambles and all the usual hashing hazards. PP and FF had to leave us rather suddenly when PP's knee gave out on her. Hope you feel better soon PP.
Woodpecker had, in usual fashion, declined to lay a long/short split, but designed to keep the pack together by putting in the world record amount of fishhooks. These caught out lots of unusual characters, including Emerald who usually refuses to do a fishhook, and Jeronimo got caught out twice! Spocky and Wide Receiver were very crafty in letting Paul pass them on the boardwalk, only to send him back on a fishhook. They thought this was very funny, but not as funny as them getting caught at the next fishhook themselves! Justice is served. This was also Jet Ski's very first fishhook. The first of many as he grows up I'm sure!
On through the woods we went until we came upon a large out break of parasol mushrooms. We all stopped for a look, and after Sorepoint and Paperwork assuring everyone they were perfectly edible, Fruity and Puss in Bootless decided they'd take some home for tea! This sparked a rash of comments "Fruity has a lovey pair, but Puss's are a bit smaller" being the more printable versions. Bell Toll was also heard to like taking it slowly, a sentiment that Horny Woman was only too pleased to endorse!
On we came to the regroup overlooking the quarry site, full of water and lots of bird life to watch while we waited for the walkers to catch up. Only 2 bags of sweets today, licorice allsorts and mint imperials. Mint imperials really do go a long way though and all too soon it was time to set off again. Howling Wilf protesting that he couldn't possibly run as he was still sucking too hard balls! Not far through the woods, and On Home was sighted.
In the absence of the Sherrif (jetting off to Italy or something) and the Deputy Sherrif (No contact made - hope he has a very good excuse or at least a note from his mother!) we decided to abandon fines today. Obviously everyone was extremely well behaved and there were no misdemeaners to report anyway!
Woodpecker was heard to ask if Paul was local? How local does the other side of the world sound? Wilf asked Horny what finishing school she went to - obviously questionning her ladyship - to which the reply was "Toxteth" of course!
Horny Woman presented the Pink Handbag to Boots for looking lovely in a matching pink Tshirt and then announced she had to leave to go and save lives - however, she had left her keys in the pink handbag so couldn't go anywhere until she grovelled to Boots to give them back. I think he was weighing up whether her car would have been a better bet than his own.
A thoroughly good trail, thank you Woodpecker, and also thankfully only 3.5 miles, since Spocky, Fruity, Paperwork and myself had completed an extra extra long A-B yesterday.