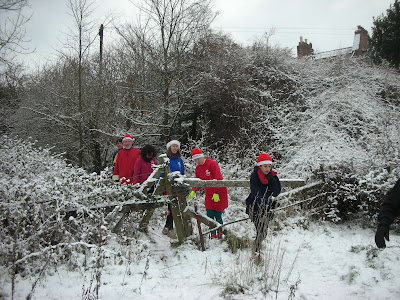 A band of 30+ hashers arrived at The Imperial for the Christmas hash in a varied assortment of festive-ware braving the snow, ice and general mayhem on the roads. For some bizarre reason we circled up at the entrance to the pub - whether this was to be near the smells of wafting food and beer or to cause general bemusement to those who just wanted a pint remains a mystery! Anyhow we were given our instructions by the day's illustrious hares, Groucho and Twin Peaks, and told to follow the trail laid out in a beautiful shade of pink flour (or was that mauve or red or orange or ...)
On on out the pub, across the zebra crossing and round we went slipping and sliding as only truly graceful hashers can go. After Emerald falsely leading us astray into some woods (what have we said about that before children?) we found the trail once more leading us up a treacherously slippery slope. Clearly we were not the only ones who had some difficulty here - what looked like a rather mis-shapen large pink blob of flour was evidence of Groucho's calamitous fall as he laid the trail....well that's his story at least....my money's on the flour being spread following a flirtatious fling with Twin Peaks!
On to the long-short split where the merry band of hashers split up, some following the trail, others just making it up as they went along only to be given short shrift from the hare and told to follow the trail like everyone else. After the regroup we found the trail leading on through the university only to arrive at a joyous sweet stop a few moments later where we were treated to a truly scrumptious assortment.
Through the university we continued where another long-short split the hashers up once more - those longs going up the hill only to be treated to some well-placed fish-hooks....those hares do know how to make us work!
Rejoining close to the train station (he does like his trains does our Groucho!) the pack navigated its way on back home driven by a burning desire to reach the warm glow of food and drink.
There then followed the end-of-year prize-giving:

Of course we mustn't miss out Itsy Bitz's display of unreserved joy at winning the Junior hasher award...that girl has all the making of a truly great fashion model (where does she get that from?).
Spocky, Groucho and Tampa were also given a few bottles of beer (with thanks from Dr Jekyll and Mr Hyde) for their endeavours in laying the greatest number of hashes over the year.

On on to the next hash - Boxing Day at Joney's Cross!