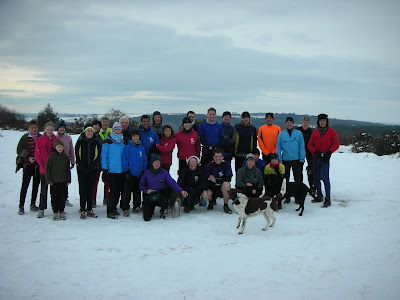 Well what a jolly (cold) lot we were braving temperatures of -10C (well it was -10 in Exeter) despite Spocky's protestations that it was really warm out there - but he had just laid the trail, so it was of no consolation to us standing around freezing our Odd Bitz off. Body temperatures suffered still further as a number of attempts at a hash flash delayed proceedings still further - first Freewheeler, then Odd Bitz and then Isosceles all wanted a picture of the vision of white loveliness (it certainly couldn't have been of the hashers).

The hare duly did his business and briefed us on the days order of play - one and on, fishhooks, long shorts with todays special treat being a trail laid in blue paint (an idea he had stolen from FF and PP). Anyway seemed to work a treat with only one lost hasher on the way (but more on that later).

On on was called down towards the woods and onto the first backcheck of the day. Must confess it wasn't too hard to find the trail...footprint evidence is a real giveaway in the snow! On we came to the first regroup - a spectacular viewpoint which the hare informed us was very pretty earlier on in the day when the sun was just rising - just a shame it was now overcast! Off the merry band hastened away and onto the first long-short split, the longs going round in a circle before catching up with the shorts. This circular motion was clearly too much for Woodpecker as he lost the trail and was only found several minutes later coming from completely the opposite direction.

The resulting regroup was time for sweeties and as if by magic there appeared a fine festive box of chocolate delights - all of them with rather cold hard centres. This time of relative idleness was clearly too much for some of the hashers as Radiohead thought it might be a good idea to start lobbing a few snowballs into the gathered crowd. A good snowball fight ensued - anything to keep that blood flowing!

The next section of the hash was clearly made for those of fine and stern stuff as the dry snow gave was to slippery, thawing, muddy ice the fishhooks giving those ahead a chance to experience the delights a second time. That gave way to the third regroup and the chance for another sweety intake although this time the hashers had clearly got the festive spirit well and truely into them with the snowballs flying very quickly indeed. The cold had clearly got to a couple of the hashers: Freewheeler, perhaps feeling left out of proceedings, going to the centre and shouting "I haven't had any yet!" closely followed by Up Yours: "Don't get me in the face - it really hurts!". The band of fine and upstanding hashers took pity on these two poor wastrels and duly obliged by focusing all their snow throwing talent at the duo and making sure they were well-covered in the white stuff. It really doesn't get any better than that does it?

Marshall Farts thought he would make someones day by shaking a tree so that the snow fell on the passing hashers. Only problem was that he hadn't figured that by shaking the tree the snow would fall on him instead! Poor Marshall (but well-deserved and 10 out of 10 for mischief making).

On on back towards home the hashers progressed, the snow by this time making it hard going. Twin Peaks, always up for a quote of the day was heard to mention: "Ooooh - I really needed that this morning!" with Slipshod responding: "Yes it was hard one wasn't it!". Fines for the both of them I think.

Other fines for the day included:

- Dr Jekyll for shortcutting (and foolishly admitting it right in front of the Sheriff);
- Marshall Farts for his heroic tree-shaking;
- Freewheeler and Up Yours for their desire to be covered in the white stuff;

On on to the next hash: 2 January 2011 at Bridge Farm, Stoke Cannon, with our GM Groucho presiding. You get to Bridge Farm from the A396 out of Exeter and just before you cross the Exe coming into Stoke Cannon, turn right and then immediately left into the farm. Groucho tells me they have organic meat for sale there which the famrer will be more than happy to sell!