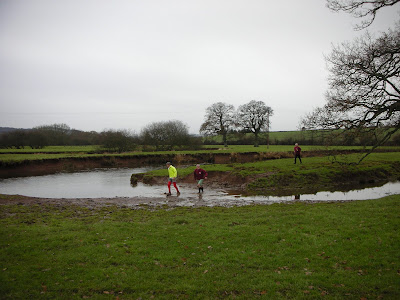 16 braves, including 3 lamed wastrels bemoaning winter colds and sneezes, appeared through the cold and the drizzle for this New Year's hash hosted by Groucho and the inimitable Ms Twin Peaks (quite a pair those two!). After circling up in a shivering and shuddering mass we were reminded of the new scoring system and received our instructions: laid in flour, 3 and on, 2 long-shorts and the first three whenever we were to come across a fish-hook.
Groucho pointed us to a nearby check but perhaps it was his old age that meant he had forgotten he had put the next check right by the entrance to the farm as we drove in - on, on that way then! Clearly not content with letting the drizzle chill us to the core, the hares decided we needed frosting even further and pushed us on through the river: first knee deep and then rather sneakily laid a false trail through a waist-high stretch of river - we do wonder whether Boots In Puss will ever be the same again!
On on towards the railway line we congregated for a regroup. Clearly we have another trainspotter as Spocky was seen to looking at and admiring the passing trains - his excuse was he was checking out but clearly Groucho's influence is showing through. On towards and through the shiggy and row upon row of assorted root vegetables we marched to much annoyance of Roo who seemed to take great pleasure in rounding up the mud-strewn hashers and streaking from one end of the group to the other. At the end of the shiggy field Spocky, Twin Peaks and Coffin demonstrated their train knowledge even further by discussing the various train lines, routes and junctions to London town: who'd have thought there was such knowledge in our hashing circle?
Thence onto the sweetie stop where the new scoring system is providing ample incentive to improve the quality of sustenance mid-way through our Sunday jaunts: chocolate buttons, jelly babies, fruit pastilles and the like - a fine spread indeed. After we were all amply filled with sugar we progressed our way back through the Exe (only ankle deep this time thank heavens) back towards the farm. Up the hill marched the longs only to have to march back down again to meets the shorts (neither up nor down) and cross the field. Maybe it was the sugar rush to the head, the herd instinct never to be alone or perhaps just a general inability to count but both Puss in Bootless and Coffin were seen doing the fish-hook after Spocky and Boots in Puss had already gone to the back of the class. A fine indeed for the two of them.
Back on home the farmer kindly supplied stiff hose and water to wash us all down swiftly followed by Spocky supplied beer, mince pies, crisps and hot chocolate. On the circle the sheriff, relying on his snitch spies as he was one of the lame wastrels, duly reprimanded the chief miscreants.
Groucho then gave us an update on the state of play with the Forestry Commission: he and Buzby will be meeting up with the Commission to see whether something can be worked out for all the hashes in the South-West. Thus the hash due to be held at Haldon next week has been changed to Upton Pyne village.
Spocky confirmed he had booked the hall and band for the 500th anniversary shin-dig on Saturday 19 March 2011 - dates for diaries everyone.
Tampa is looking for a hare on 6 February 2011 and after - any volunteers?
On on to 9 January 2011 at Upton Pyne Village car park with Groucho again performing the honours.