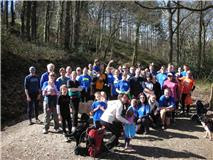 Well the hash has managed to reach its 500th run thanks to the support it has received over the years, with our numbers now averaging over 23 per hash. For this the 500th over 40 hashers appeared to form the hash circle, this certainly moved on from the seven hashers who came to the very first hash, four of whom were my family members and friends, from the very same venue.
The trail was laid by my good self, Groucho, with of course the assistance of the one and only Miss Twin Peaks who it is rumoured knows the woods like the back of her hand. We started the hash with a long short split for a change however Geronimo decided to guide the longs in the right direction to rejoin the shorts, I think he felt sorry for them going over rough terrain, bless his cotton socks. The hares had a cunning plan that involved yet another long short split only this time Geronimo left them to it. The same familiar faces lead from the front when the longs reached the next hash halt, PP, Stat-Nav, Radiohead and of course Spocky-Bitz. Next was yet another long short split the longs heading down a very very steep bank, many choosing to slide except for Howling Wilf who adopted a different technique with added swear words, even more swear words were heard from the longs upon reaching a fish hook and faced the challenge of having to climb back up the dreaded bank whilst the shorts watched the action from the public gallery, the top of the bank. Eventually the pack were altogether once more the only obstacles in front were the water hazards,gorse, brambles and fish hooks. At the sweet stop the goodies were soon put away with Tampa leading the charge for any forage, some of which was sponsored by Bell Toll, giving us his left-overs from the previous nights barn dance. Having been fed the merry band of hashers continued on their not so merry way with a good deal of uphill in front of them with more brambles thrown in for good measure. After long climb the trail levelled out and gone was the moaning and heavy breathing a new injection of pace seemed to take over for about two minutes before returning to the more normal speed known as slow and unsteady until we all finally arrived back in the car park. Once the pack was gathered together Stat-Nav and Odd-bitzs handed out the fines of which there were many, in fact too many to mention, the monies going to Red Nose Day, thanks to the pack we reached a grand total of £103.20, what can I say but great ! As well as the fines we had two namings. Mudflap was accompanied this weekend by his good lady, Susie, who was named The Flap Controller. Also Stat Navs partner in crime, Chloe, was named Tom Tom.
Finally can I thank Spocky and X-bitz for organising a great barn on Saturday 19 March every one I spoke to was full of praise so well done.