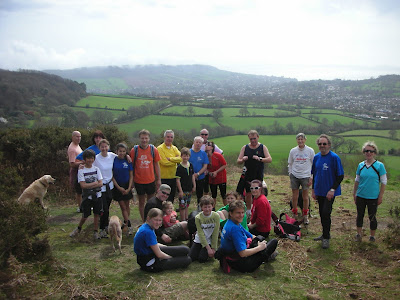 The pack today numbered twenty-five who waited eagerlyfor the arrival of our hare, one Mr Slipshod, yeet to the surprise of all he appeared on the scene in his car. He informed us that the trail was finished at 10.00 am so he went home to see his beloved, remember it was Mothers Day. and to have a cup of tea. Anyway minutes before he,Slipshod had arrived another hasher in the shape of Doctor Jekyll left the car park,by car to find a more natural environment todo natural things and I don't mean to powder her nose.She was of course fined by our acting sorry I mean deputy sheriff Odd-bitz. FF was also a little concerned implying that he felt slightly undressed without the pink Tshirt to match his pink handbag. Eats Shoots and Leaves came to this hashers need making his feel more complete as well as less cold. Finally the circle was formed but Ben the Dog just carried on doing his own thing hismaster Tampa the shouted sit but there was no reponse, so Tampa shouted even louder, this resulted in the whole circle sitting down.This action left a sign of bewilderment on both Ben end Tampa's face, after which one of them started grinning from ear to ear, an action slightly more difficult for dogs.
Our hare informed us that the trail was one and on with an added bonus of four long/short splits not to forget the eagerly awaited goodie stop. The start, well we must have a start was straight on to a long/short with the longs headed downhill silly hashers led by Twin Peaks,FF,PP and Baglady.Meanwhile the shorts enjoyed the delights of a flat route, meandering between trees and bluebell plants only about ten days or so from blooming. However our peace was soon broken on the short route as we heard the calls of on-on coming from behind us, those longs had caught us up with bownless energy passing us as if we were standing still which some of us were. Doctor Jekyll seemed to be rather athletic today perhaps its all down to these natural breaks of hers, I must make further enquires.
There then came a series of checks, time for some members of the pack to get their bodies working properly, certainly worked for Odd-bitzs who at the start was walking was now running to such an extent he even found some back arrows/fish hooks.Our was rather cruel today forcing the pack to scale what seemed to be the highest hill in Devon, everyone was down to a crawl especially Groucho who had some how managed to form a 'u' type shape with his nose nearly touching his feet.Doctor Jekyll however got hold of Groucho and dragged him up the hill, Groucho loving this experience.At the top of the hill from hell was the sweet stop, what a relief with a good selection of goodies to be polished off , which they were of course whilst taking in the view of Sidmouth in the distance.Then we were off once more the wonderful view of Sidmouth but a distant memory, soon there was another long/short the shorts rumour has it that some of the hashers on this route enjoyed a conversation between two hashers namely the subject of bra's but it went deeper than just bras in general, developing to types then continuing on to size of said bras, these two obviously know their bras especiaaly as they were wearing them they were indeed fountains of knowledge one this particular, I would suggest that they enter on to the Mastermind Programme perhaps as a pair ! Who are these experts you may be asking well I suggest you speak two either Ex-bitz or Puss-in-Bootless.
Back at base beer was drunk peanuts were eaten and fines were collected by the sherriff who was showing no mercy, come back Stat-Nav !