By Alastair Hibbins - March 15, 2015
Why can't the weather just get warmer?  There was another chill in the air at Killerton.  We met in the usual car park by the bridge.  Fancy Liquor and Armless didn't know whether the hare t-shirts were going to be brought along, so they wore wigs (hares) instead! 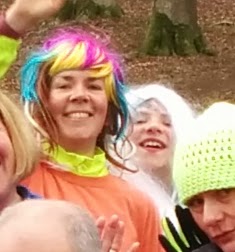 The trail started with a long, along the path at the bottom of the valley, although Rocky and I were checking up the side, and found a fish hook which was destined for us later on the On-Home.  But it was all just a loop, and we had to leg it up hill  and looped round to meet the shorts at an early regroup.  The trail then stayed in the woods as we looped around the edge of the clearing, until the second long-short.  This was the one that we had previously been warned was not for children.  This was because it was straight down to the valley floor, where we were supposed to be amused by a Ha Ha!.  But we never found it!  The marks disappeared half way down, and we spent the next 5 minutes trying to look for dust.  So we headed back to rejoin the shorts (as we would have done if we'd found the marks anyway!).  Then the sweety stop (below) where we interrupted a family enjoying a quiet Mothers-Day day-out in the woods (see the man on the left of the photo!).
There followed a few more loops round the wood.  We were hashing in a small area where the trails nearly crossed - but the hares managed to avoid any confusion!  Then back to the top of the valley-side overlooking the car park, with only that fish-hook to delay us.  But Tear Away, who was with us, suddenly decided that he was the hare, and we could high-five him to avoid returning to the back of the pack!
Beers, wines (!) and soft drinks were enjoyed, along with Spocky's crusty nuts.  Fines went to Coffin and Emelda for arriving late; Hole in 1, Fallen Boobies and Dropped Balls for holding hands and nerd naming, and others (including Minxy who struggled to get Pants Down up this morning, he didn't want to come.... apparently.)
Next week's trail is on Woodbury Common (Castle Car Park). And DON'T FORGET TO RATE THE HASH!