By Alastair Hibbins - September 06, 2015
Octogenarians are a hardy, experienced bunch as proved by Woodpecker who had risen from his sick bed to lay today’s trail. The chalk talk advised that this was an “old school” trail, there was to be no hanging around at checks waiting for the hare to point the pack in the right direction and as well as a few Long/Short splits, there was a Bold/Cautious split (later to be known as a Brave/Cowards split). What we weren’t told was how many were required to turn back at a fish-hook which meant that fairly early on in the trail, most of the pack found themselves returning to the hare who then advised that only 4 were required to do so.


The trail was all through woods, with a number of steep embankments to scramble around on. At the B/C split, the majority of the pack felt confident enough to follow the B route, leading through a tunnel and up a precipitous incline; one of those where you dare not stop moving for fear of falling backwards. This was successfully negotiated by everyone – eventually, and the pack were rewarded by the sweetie stop soon after.

As usual, I was completely disorientated and had no idea where I was going. I was chatting away to No Butt for the remainder of the trail, but vaguely remember being hit in the face with tree branches and sliding down another slope, using trees to slow me down. Anyway, before long, we were On Home.

In the circle Heidi was named Splat and Helen was named Child Catcher as she had caught her daughter who managed to fall backwards during one of the mountaineering sections of the trail.

If you only read the words via the email, you'll be missing out on being able to view the route we hashed.  Visit the blog at www.CityOfExeterh3.org.uk to see where we went!

The next hash is on Sunday 13th September starting from the Warren Car Park on Woodbury Common, hared by Spockybitz - a map is here.


And please don't forget to Rate The Hash. 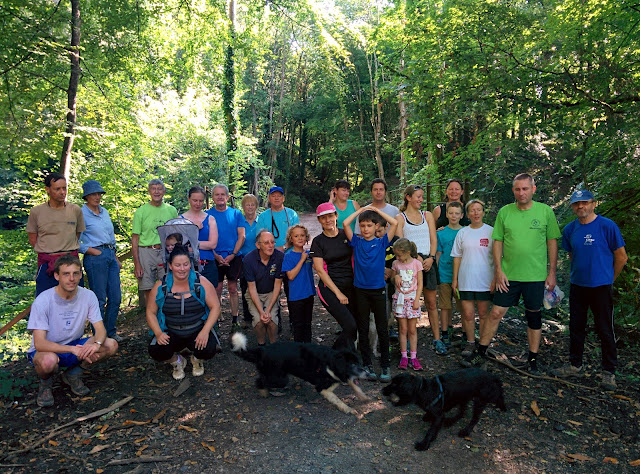