By Alastair Hibbins - January 10, 2016
Blobby played the role of gatekeeper, as he had been given the secret code to allow us to park at Harcombe woods.   Apparently, there had been some unsavoury behaviour taking place meaning that the car park was now locked for the majority of the time.
A virgin hasher, Councillor Harcombe(!) of the Parish of Stoke Canon, had been dragged along by Twin Peaks.  Wearing an orange T-shirt he was particularly conspicuous, and Twin Peaks ought to have been fined for not explaining that it was the Hare’s privilege to be dressed in orange – although the actual Hare T-shirts are now more a dirty shade of peach and Blobby was forced to wear a damp T-shirt that had clearly been screwed up in Spocky’s car since the trail before Christmas.
As you would imagine, from the venue, the trail was through the woods.  REALLY through the woods.  No path?  That didn't stand in the way of the hares, who themselves couldn't find the trail at times as we picked our way through undergrowth.  There were more gentle options for hashers with delicate ankles, but most of the pack took the difficult route hence the slow pace; a hasher with technology pointing out that we were clocking 51 minute miles at one point.
The long went on a ha ha and did a couple of extra loops elsewhere on the trail.  Bluetoe managed to find the flour bottle that Blobby had lost while trail laying.  Everyone suffered from gorse lacerations and tree spring back.


Back at the car park there were numerous fines.  At this rate, if everyone pays up, it will more than cover the Christmas drinks bill.
Rate the Hash is back again for 2016 so don't forget to award you scores - click here. Don't forget that subs are now due - see here. Next week we're at Stowford Cross - click here for a map. 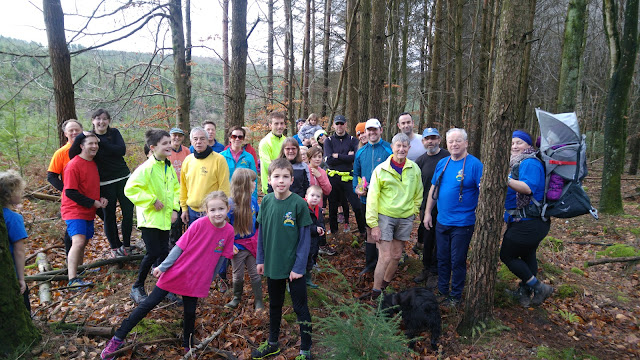