By Alastair Hibbins - April 03, 2016
If you look at the map of this weeks trail it looks a bit like a ghost - to me.  That's an aside.
We all managed to make it to the Warren Car Park, despite reports of various "Road Closed" signs on route.  Some hashers were forced to take a diversion while others saw no signs and had an easy journey.

We circled up, had a moan about it being a bit chilly and digested the comprehensive instructions from Woodpecker about today's trail; 3 and on, follow the front runners, no more than 50 paces between marks.
The trail headed out of the car park, which was the last landmark I remember, as all Woodbury Common looks the same to me.  The first part of the trail all seemed to be downhill, and we went through some very dark woods at one point.  I was distracted by conversations - being the social animal that I am - but remember jumping over some ditches at one point and nearly not making it.
There wasn't a lot of checking going on, so it was a good job that Boots turned up and eventually Imelda.
After the sweetie stop, the trail started going uphill and there was a loop across an exposed part of the common for the longs.
There were fines for the usual misdemeanours; lying down on the hash and fish-hook avoidance among others.
Next week we're in Liverton in the plantation: from the A38, drive past The Star. Take first right. Park at the entrance to Temper Way, which is the second parking area on the right (TQ12 6HL) a map is here.  Please don't forget to RATE THE HASH this week - the votes will be counted and prizes awarded at the 2016 Christmas Party. 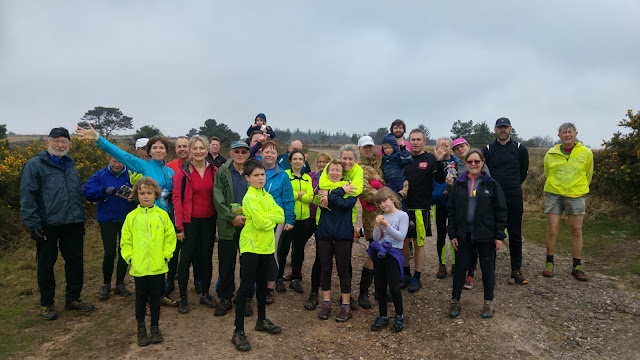