By Alastair Hibbins - July 26, 2016
Words by Sorepoint this week.
Mustering at Bridge Farm, Tampa was early!  This doesn't happen very often so thought it worth a mention.  Only late comers today were Woody and Kanga, but even they need practice, as were only a couple of mins late, the circle hadn't really started.

Groucho did the usual welcomes, extended to three new runners and various children and dogs.  One new runner was Bull Bait's dad, the other two seem to be family of Miss Peaks - why have they not been before then, we ask ourselves.
Two and on today we were told - Groucho obviously trying to save on flour costs.
Anyway, on was called through the farmyard and we were off.  Groucho trying to keep up, but the pack were too quick for him.  Long Short split saw the longs climbing up a hill, only to come back down again on the other side of the trees, to find Groucho loitering by the fence.
Through a woody glade and on was called by Paperwork into the next field, but where was the next blob? Couldn't find it anywhere, so we looked in the trees - there it was, but it was on two the other way?  Never mind, Groucho obviously can't count today either.
On we go to a hash halt.  We all waited like good little hashers, to hear Groucho calling from the other side of the woods - don't bother with that one, carry on.  Now, of course that made for lots of confusion as every time we found a hash halt, no-one knew whether to halt or not. Through the woods and over a couple of ankle turning fields, with farmer Jim following on his quad bike.  Was that just to make sure we didn't get lost I wonder?
Loads of sweeties by a fallen tree and on we went again.  This is where we found the water.  Now, everyone was a little slow at getting their feet wet at first, but by the third time of crossing the stream I'm not sure there was a dry piece of lycra to be found!
Not far now to drag our wet bodies back to the farm.  Splat was shivering by now and Bull Bait senior had very soggy jeans.  At the circle after, Miss Peaks cunningly discovered that he had meant to come hashing last time he had visited, but it was raining so he declined.  This of course gave a perfect opportunity for a naming ceremony.  Mr Fairwesther was born!
Thanks Groucho for another brilliant hash and for all the fun in the stream!
Please don't forget to Rate the Hash!  Next week we're at Topsham Rugby Club: a joint trail with Isca H3. 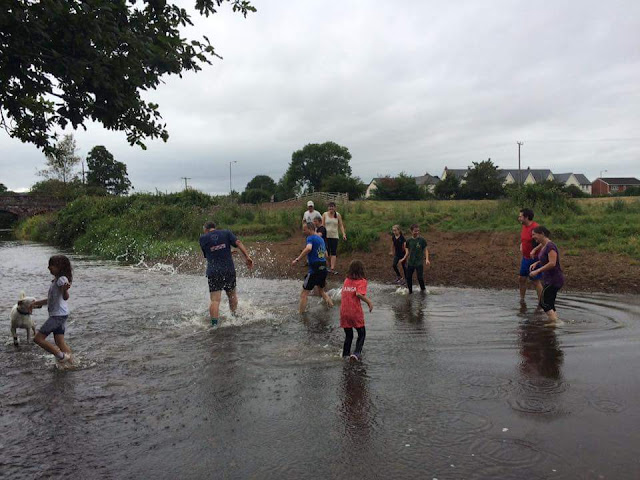