By Alastair Hibbins - July 17, 2016
Shhhh.... don't wake Groucho - he's still asleep!
This week's hash was to celebrate Stingray's birthday - its not for a couple of weeks yet, but he's very excited as he's going on a submarine!  Nothing quite so exciting today, but it was a brilliant, if not too-hot hash around Peak Hill.

The pack had mostly already gathered by the time we drove into the car park at 11.01 - apparently that's "late" nowadays.  We were certainly not the last, with Tampa following, and A la Ronde and family very far behind!  As the chalk-talk got underway, to everyone's surprise, the local bus service decided to drive into the car park.
We were warned that the first part of the trail took us close to the cliff edge, and indeed it did, as headed across the road towards the sea.  We followed the coastal path for just a few yards, before going back inland, and into the woods.  We soon reached a regroup on the side of Peak Hill Road again.  Then up through the log piles as Woodpecker remarked at the quality of the trunks (apparently its the girth that's important),  and quite a bit of fumbling around in the undergrowth followed - but it was all well marked.  Lots of fish hooks, with Rocky doing his best to avoid them, and with X-bitz seemingly taking most of them in her stride.  Then a good long-short, which took us further down into the woods. Molly decided to take a dip in a non-existent puddle - she was clearly struggling too! We waddled back up in the sweltering heat to the sweetie stop overlooking the countryside back towards Newton Poppleford.   Given the number of r*ns we've had in this area, and at that viewpoint in howling wind and torrential rain, it was disappointing to get no more than a whiff of a breeze to cool us!
Speedy was then keen to get a head start on the "long" that followed, but we were thwarted by yet another fish-hook, with the remaining trail taking us all the way around the edge of the fields.  Molly decided to take a dip in a real pool this time, and I wish I had done the same... but the car park was in sight - but on the wrong side of the valley.  The trail kept us high around the edge, leading us back to the cars by about 12.20.
Fines were awarded to many - lots of nerd naming and sitting down, not to forget the late arrive-ers.  Then across the road for the picnic, at which point I learnt that Sorepoint had hit Bollards on the bum during the trail, but had warned her in advance... something to do with a horsefly.  So that means its officially ok for any hasher to slap her on her arse, as long as you shout "horsefly!" first.
Please don't forget to Rate the Hash!  Next week we're at Bridge Farm, Stoke Canon (map is here). 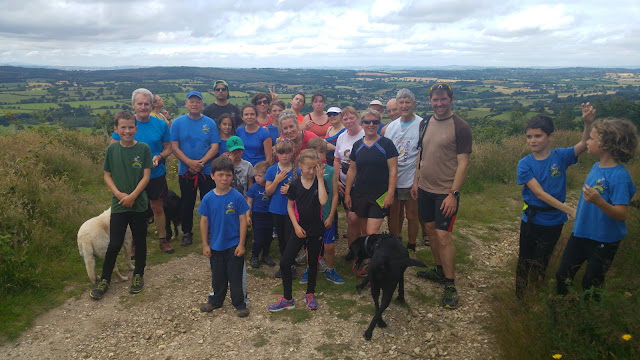