By Alastair Hibbins - August 21, 2016
A massive turnout for Woodpecker's trail this week - but no-one was pretending it was for the r*n, we all knew that Mrs Woodpecker's spread back at Pecker Towers was going to be superb.  But the hash itself was a good one too.  It was good to see Isosceles again, and also much of Woodpecker's family. Plus Raspberry Nipple was back from her travels, and of course Spocky and Damp Patch were given a warm welcome after Spocky's 40-b4-40 run the day before.
"Only a genius could find shiggy up here" Woodpecker declared, and when he gave us the On-On, he said head East - of course no-one knew which way that was.  However Sorepoint was duly fined after the trail for getting out her mobile to find out.  There was a back check (or back cheque as Woodpecker had previously advised) almost straight away, and then that elusive shiggy as we headed off-piste.  We r*n alongside the Yettington road, and then arrived at the first regroup, where the hash flash (below) was taken.
The the trail crossed the road, and headed left.  Although most of the pack followed the FRBs visible ahead, by heading down the steep slope towards the boggy pool at the bottom.  At this point Speedy dared Rocky to run straight through the pool, which he stupidly did, and initially looked very happy for himself.  Until he realised that he lost BOTH trainers.  He was still smiling though, but then he noticed that they were no where to be seen, and had been sucked into the mud!  Then the tears started and it was Speedy's fault for daring him.  Speedy found one of the shoes, and I was sent in to find the other.  Not happy getting my shoes so muddy, and then struggling to find his missing trainer by poking at random areas of goo under the water!!
The trail continued through the plantations, to the sweetie stop, by which point Rocky had just about recovered from his trauma.This was actually most of the way round the trail, which continued back parallel to the road again, in the opposite direction.
At the circle, everyone was fined £1 as a donation to the Chestnut Appeal, which is the charity that Spocky was fundraising for,  and after beers and snacks, we headed down to Exton for a swim and lunch: it was excellent as always!  Thanks to the Woodpecker family!  Groucho awarded Mr and Mrs Woodpecker some Olympic themed presents to say thank you: tea-towels and a medal-cum-bottle-opener!
For the Chestnut Appeal, and Spocky's fundraising, £100 was raised from donations from hash members, plus another £30 from the hash account.
Please don't forget to Rate the Hash!  Next week we're at Coronation Avenue, Dawlish; hared by Double-D and 3D (note this is a change of venue to that originally published) 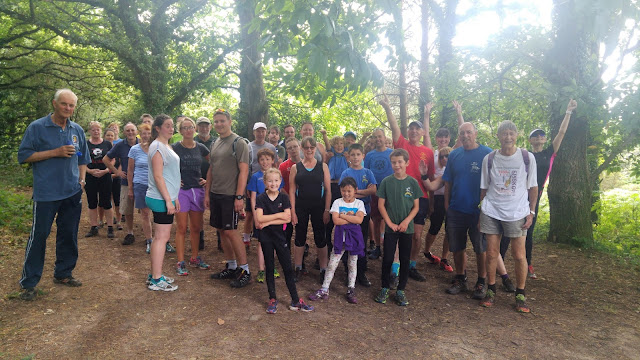