By Alastair Hibbins - August 14, 2016
A number of hashers had camped at Tipton St John Scout Hut overnight, having celebrated Strapo’s forthcoming Big Birthday.  There were rumours of sloe gin and shooting stars, so it sounded like an enjoyable evening.  It was also good to see Sloppy Seconds making a return from Herts.  I thought that Strapo was very brave to lay a trail the morning after such an event, but I was satisfied that he was looking suitably rough and he hadn’t even bothered laying the last section of trail as it doubled back on the first section which is exactly the right attitude for a morning after hash.

I’ve no idea where the trail went.  My memories are of crossing a stream, heading through a tunnel, climbing up a steep bank (and later climbing down a steep bank).  All of the trail seemed to be uphill, which, of course, it actually wasn’t.  CC and I seemed to be near the back.  We were accused of gossiping, but that wasn’t happening due to the exertion and not being able to breathe and talk simultaneously.
The sweetie stop was in a field.  We had a photograph taken.  It was hot and the sweets were good!
On the return leg, we ran past the scout hut where a H3 sign was clearly in place and along the road.  One motorist went out of his way to thank CC and I for stepping aside to let him through.  We were just pleased to have the excuse to stop.
Back in the circle there were various down downs for little hashers wearing new shoes.  The parents also joined in.

Apologies that there weren't any words last week.  After the BBQ on the Meadow, we relocated to the back garden, but the drinking continued.  Bollards and CC were happy on the gin! 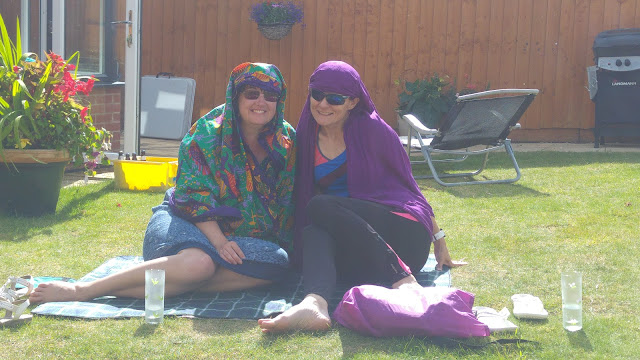 Please don't forget to Rate the Hash!  Next week we're at Four Firs on Woodbury Common (map), then back to Woodpercker's house in Exton for swim and food.