By Alastair Hibbins - April 02, 2017
Today's trail was in honour of Splat's 9th Birthday.  Apparently, she had laid the last third of the trail (alongside Stingray), and Bull-Bait had done the rest, while CC put her foot up.We were advised that there were a number of L/S splits, with L/S standing for Lunacy and Safe rather than the usual definition.  We were clearly told that it was a 2 and on trail, but that didn't stop a number of people shouting On 2, when they should have shouted On On.

The trail had plenty of loopy bits, and at times we found ourselves on familiar territory.  Luckily, it was well marked as we were hashing within a very small area.  Wide received commented that he liked it in a tight area, and was suitably fined at the end.
Fish-hooks required 4 to return to the Hare, although Rocky and Spongeblob seemed to have a lot of issues with untied shoelaces.  They found themselves in the Sherriff's book several times, alongside Haribo who did the most amazing fall, roll and return to feet, all within a split second.
The Lunacy/Safe splits were suitably challenging for those taking the L.   We picked our way through the undergrowth with plenty of opportunities to be poked in the eye with a springy tree branch or to catch your foot in some low growing brambles.
At the Sweetie Stop, we contemplated why the green wine gum was labelled Claret.
Bull-Bait had his first taste of wild garlic - nice in a salad - as Stix uprooted some (illegally).  Damp Patch reckons that it's also good in home made bread - I'll have to give it a try.
We returned to the car park where we were treated to butterfly cakes, courtesy of CC and we all sang Splat "Happy Birthday", as only the Hash know how.
Damp Patch recommends checking for ticks as he found one on his sock - You have been warned! 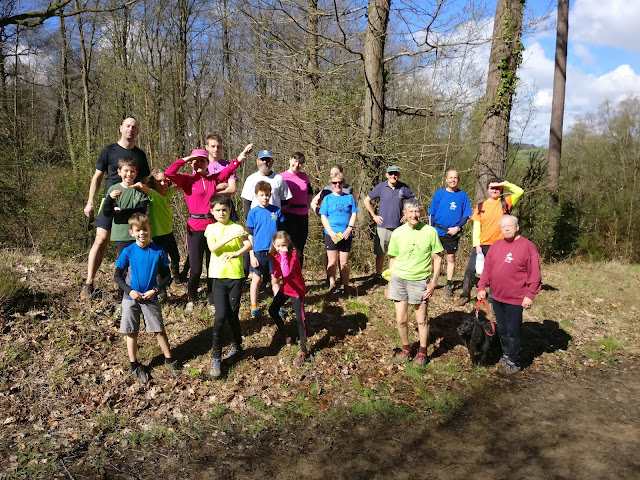