By Alastair Hibbins - April 09, 2017
Some may say that this was the first summer hash of the year.  Not becasue of the weather (which was stunning), but becuase of the return of Sorepoint and Paperwork after their winter hibernation. And they had brought Tiverton visitors with them (sorry, I failed to get their names, or intoduce them properly to the hash!). We all had to pay parking charges, but it was nice to know that Mid-Tiverton Council had anticipated  Miss Peak's visit as the machines were about 2 foot off the floor!

Hole-in-1 had laid the trail yesterday, unaided - not that seemed to be a sensitive point or anything!  She told us to expect to use our best hashing brains (do hashers have brains?) on this trail, and look out for a family of ducklings, and some other historical focal points.  She told us that it was muddy and hilly - but her shoes didn't seem to show evidence of the former... I wonder why?
We set offback towards the main car park entrance, then up onto the canal path.  Then it was a totally flat and dry trail (past a coupling of sets of ducklings) all the way along the canal to the sweetie stop.  2 miles in the heat was quite tough, but there was some checking, despite most the the marks having been eaten by the ducks.
The sweetie stop was as Manley Bridge, where Wide took some posing-selfies under the bridge, t-shirt removed, next to the Manley sign.  And Bollards and Twin peaks were posing besides him!  Then everyone appeared to be admiring Wide's bushy chest hair - apart from Tight Lips that is, who was screwing up her face.
Then the second half of the run (which was also totally dry, and almost flat) took us on to the lanes, and back via the old-railwayline-path.  The pack got a bit spread out, so we invited a fish hook for 15, and everyone seemed to oblige without any doubt (apart from Paperwork who was about a mile ahead). Then up through the houses, and on home.  And some lovelly chilled beers and snacks on the grass.  There were numerous 'sitting down on the hash' fines as there was quite a pause before proceedings took place - but who cares - it was sunny! 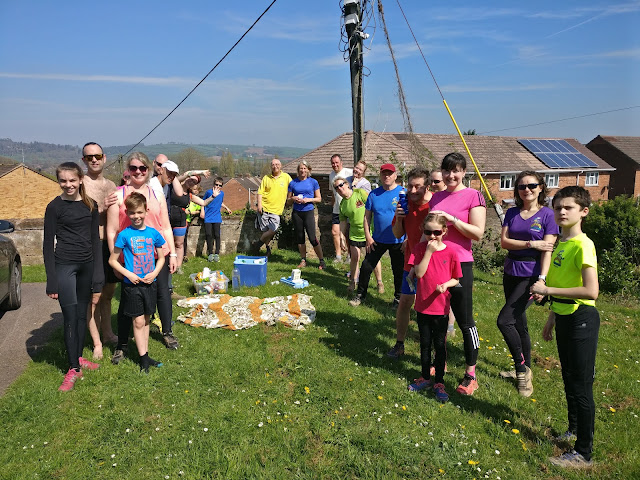 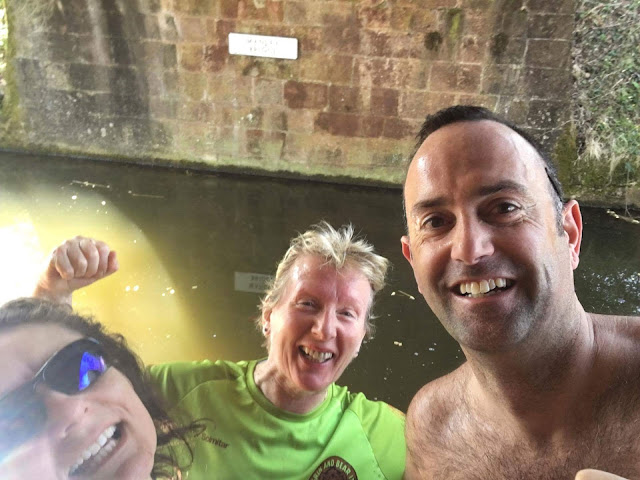