By Alastair Hibbins - April 16, 2017
Best hash of the year - so don't forget to Rate the Hash and vote for it!
We 'Easter' Hared the trail from the Hatherly Labs, at the University of Eggseter, which is an eggcellent venue for this holiday weekend.  There were a few noticiable absentees, not including Paperwork had to go and find 'a proper toilet' up at the Forum Building, but a good sized pack of some 30-odd gathered on a slightly chilly but sunny morning.
The trail started with a long-short, with the longs fooled into going up the road towards the squash club, when actually the trail went across the valley and along the side of the cricket pitch, before heading across the road and around the student accommodation. It rejoined the shorts back at the very beginning of the trail.  Meanwhile the shorts were making good progress, along past the lakes and up onto Pennsylvania road.  Our 'check-back' caused some confusion becuase it had been coloured in, but Rocky and I remarked it for the longs to appreciate, and then (l)egg-ed it back to catch up the shorts who were heading towards Hillcrest. Eventually the longs did make an appearance, as we headed on the the Duryard Valley for the sweetie stop and hash flash.  There was some sitting down on the bench! 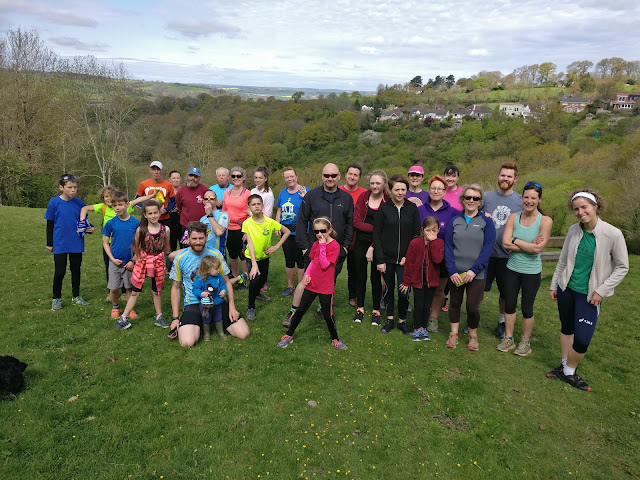 Then we followed Belvadere Road (its really a muddy track) behind the back of the sportds pitches, before the second long-short. The longs taking a detour downhill, and then back up 'Cardiac Hill', while the shorts continued past the sports hall (where the sign said it was 16º).  We worked our way back down through campus before the Easter Egg hunt in the woods at the bottom of the campus.  Speedy made the announcement ('BING BONG') so we all knew what we were looking for - 24 tags to find.  Goodness knows whether we retieved them all, but they were the numbers for the Easter raffle that followed once back at the car park.  Well done to Haribo, Child Catcher and Twin Peaks, whose numbers came out of the random number generator (me!), but we all took a share of the chocalate eggs.