Everyone was reluctant to leave their cars, as rain lashed against windscreens. Fruity Bitz was back again for a visit, and obviously had brought the Irish damp with her.  Woodpecker swiftly took control of the circle and commented that it was the second time this year that his trail had been disrupted by the weather. Howling Wilf had helped plan and lay the route and there were 5 long/short splits (although they were only mini longs – I beg to differ as the last long certainly took me out of the way, albeit erroneously).

As usual on Woodbury Common, I’ve very little idea of where the trail actually went. I was with Twin Peaks for some of the time and she didn’t know either. However, I can tell you that it rained – a lot - and some of the paths had become rivers.

At the Sweetie Stop Boots was trying to trick hashers into eating his dogs’ treats, but no-one fell for it. Bertie Bassett was playing hard to get as I particularly fancied him this morning, but he came out for Wide Receiver instead. Then I made the mistake of referring to Woodpecker as Strongbow, and not realising why I’d make that mistake until Tight Lips pointed out that it was all to do with Cider.

The final long/short split was interesting as we seemed to lose marks. Fortunately, Boots was with us and found the correct way after the rest of us had gone significantly wrong. We continued in the direction that we’d gone it, ensuring that we were running parallel with Boots, and all finished up on the same track, just a long way behind.

The car park was visible from the On-Home sign, luckily, as the direction arrow had washed away. The closing-circle was short-ish. I’ve no idea who was fined as I was concentrating more on getting the feeling to return to my numb-with-cold fingers, so that I could open the peanuts without spillage. It was raining so much that hashers had fetched umbrellas from their cars. Certainly the worst weather on a Sunday for a while, or since Woodpecker’s last hash, anyway.
(Words by Bollards) 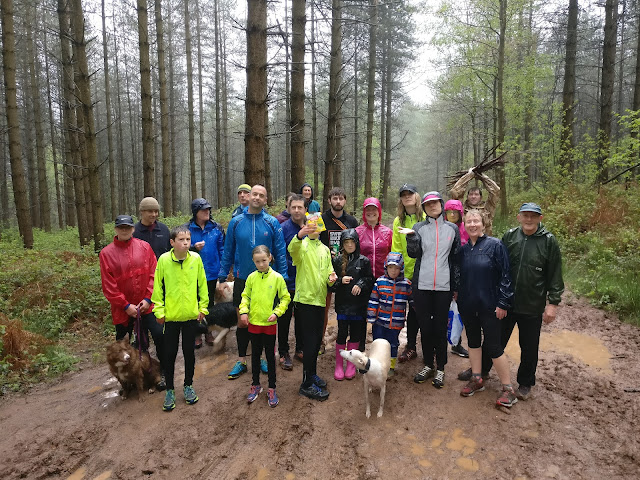