As usual, for Hash Words, I’ll start off with a comment about the weather.  It was warm – very warm, and sunny.  I started to wish I’d put more sun-screen on.  In the opening circle we had a minutes silence due to the events in Manchester last Monday then the hare, CC – still with a dodgy ankle – advised us it was a two and on trail with one long/short split where the long was much longer than the short.
We headed off out of the car park and almost straight to a long/short split.  The longs wound up through some houses, crossed the motorway bridge and then crossed back again via the blue bridge.  We passed an attractive display of heathers, headed up some lanes that used to be the main road through the area in “the old days” eventually arriving at the new housing estate where BB and CC live where we re-joined the shorts.  Fortunately, there was some cold water on offer at the sweetie stop alongside an array of chocolates and fruity gums.
Rehydrated, the pack headed further into the estate and onto a cycle track that lead to the Met Office.  We weren’t allowed through the Met Office grounds so took a route around it, down to the main roundabout and back up along the main road that used to be a tiny narrow land; cue more comments about “the old days”.
The longs had a deja-vu moment, but there was a nice big arrow pointing in a different direction to the first time round.  We had completed a figure of 8.  At the bottom of the hill we were On-Home and soon arrived back at the Railway Station Car Park.
[Words by Bollards] 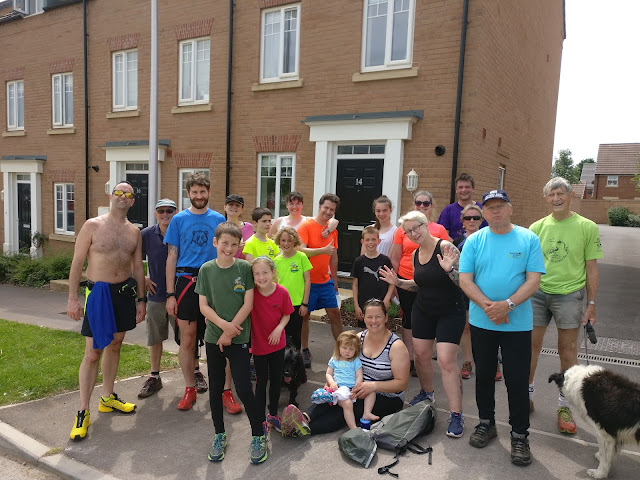