By Alastair Hibbins - May 07, 2017
The first BBQ of 2017 and the weather stayed dry.  Much dryer than last week - it took me a while to work out why the box of hash snacks was wet in the bottom! On arrival, Hole-in-1 was just writing a sign for her front garden telling hashers to use her back passage.

It was good to see Howard and children back, and also a harriet and dog who came with Woody (sorry can't remember the b*tch's name [Bollards told me not to write that because its rude..., sorry]).
Since this BBQ was to celebrate Dropped Balls' 18th, it was suprising that he wasn't there - apparently he couldn't get the morning off from Burger King!

We were promised a different trail, and something on the long side.  Somehow Rocky, Stingray and I managed to get a long way ahead during the first few minutes around the houses.  We began to think we'd cut short somehow, but after a check where we'd gone all the wrong trails, the pack caught us up.  But the hash seemed to continue at quite a leisurely pace - probably because Paperwork had done the A2B yesterday, and Speedy was tired from the Monopoly run around Exeter.

Lots of up hill in the first quarter of the trail until we hit Argyll Road which runs around the Duryard Valley. Then a long downhill past the Riding Stables and towards the Duryard student accommodation.  Then back up towards the University sports field, to a check familiar from the hash 3 weeks ago.  To the right there was a trail, but then a Ha Ha, which was a bit confusing, espcecially when we'd discovered another trail to the left.  But Paperwork was coming back that way, and wouldn't answer questions about what he had found. Assuming it was a fish-hook, Speedy, Armless, Twin Peaks and I proceeded slowly, knowing that Belltoll was also in front of us.  He came back too - so we went even more slowly.  Some of the rest of the pack caught us up, and Speedy, Armless and I decided to check in the field - and wait for enough others to go past!  But there was no fishook - the trail continued up the lane and left back into the fields I'd just left, and on-on to the Sweetie Stop (at the same place as 3 weeks ago!!).

After the hash flash, we continued back to where we'd been about half-an-hour ago, a little journey up Stoke Road, before heading along the bridle way, to the downhill path on the edge of the houses of the Stoke Valley, past the park at the bottom and on a path (where there must have been 4 fish-hooks) towards home.

Lots of fines were awarded (I counted 4 for our family - which I didn't pay...) and then Hole-in-1 did a great job cooking for all.  We sang happy birthday to Dropped Balls! 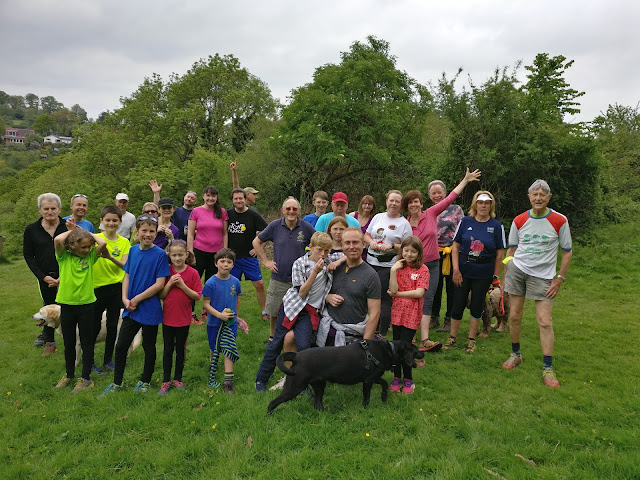