By Alastair Hibbins - September 29, 2019
A good size pack turned out on a wet and windy Sunday morning at Ashclyst Forest.  Spocky welcomed the pack - with his two pairs of shorts on (I never quite worked out why).  We welcomed Chippy back - who'd come with Woodpecker.  And it was the last visit from Sorepoint and Paperwork with the summer coming to a close and their Sunday morning hashing returning to Taunton.  Spocky drew attention first to Speedy's broken wrist - which appeared longer than his unbroken one - and to Sorepoint's flashy new car. But Sorepoint told us that she'd been rear-ended (quote of the week?), and it wa sonly a hire car.

Rocky wrote the follwoing words:
Child Catcher got very confused with the long-short split. Either she didn't notice that we ran past it twice, or Bullbait kicked it out too early after we went past the first time! This was a subject of heated debate at the sweetie stop...
Mad Max claimed that 'the shorts' don't do fish-hooks!!
There was lots of funny-goings ons in the circle after the trail.  Stingray got fined for not checking properly, Hot Rod for nerd naming, and Max and Woodpecker for cheating on the fish-hooks.  Speedy also revealed that Wide Receiver had told him "There's only one way a teenage boy breaks his arm"! (Another quote of the week?).  Boots awarded Spocky with the caravan (or a framed photo of it) that he'd bought from him on eBay.  Actually it was the caravan that Spocky already owned, which Boots had listed in realiation for Spocky previously selling Boots' trainers!

Next week we're at Uphams Plantation - thatnks to Howlin' Wilf for stepping in to lay at the last minute! Map is here https://goo.gl/maps/mhbrGRD9QeLyLdqR6 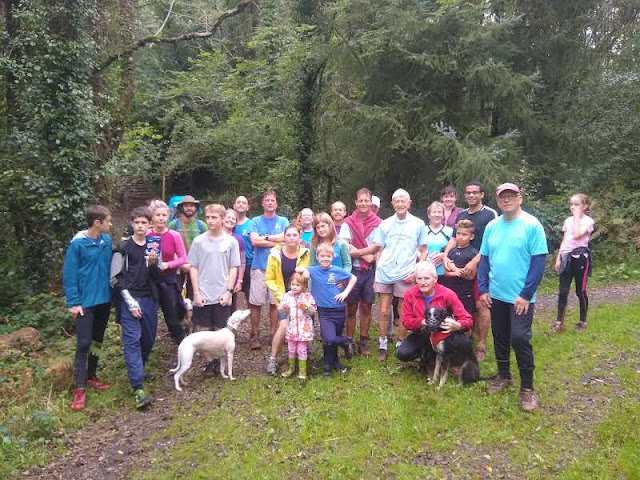