By Alastair Hibbins - January 26, 2020
After last week's coldest hash of the winter, we had the wettest hash of the winter today.  It really was miserable as we arrived into the car park at Dawlish Warren.  All the hats and coats were out, and our hare - Wide Receiver - was one of the very few in shorts.  It was good to see Cums to Soon and Just Brett (no official name) back for 2020, and No-Name "Alex" returning again.
Bollards greated the pack as Grand Mattress, and was about to set us off when Woodpecker arrived. But we were all getting too cold to wait!  The trail took us back under the railway line, and then left through the car park.  A check saw us change direction, and   onto the South West Coast path, which after a couple of fish hooks, and Stix emptying his baldder (Tight Lips didn't have to look), we got ourselves onto Exeter Road just before Dawlish. Then over the crossing, and a hilly long-short split led us to the park land just above the leisure centre for the sweetie stop. Possibly the most exposed point our hare could find for the vegan sweets that waited for us.  A further long short round the houses before back onto Exeter Road to rejoin the coast path. Now with the wind and rain driving behind us, we enjoyed a run along the sea wall, and a slog along the beach, with the added entertainment of a fishook, back on-home to Dawlish Warren.
In the circle, the cool-box holding the drinks was literally floating away!  For some reason, Bullbait put a high-vis jacket on, and we remembered that Woodpecker was on the hash as well!  A few fines , including Stix and Stingray for sitting - in the cars - at the end of the hash.
Next week we'restarting from Pinhoe Station (map), and I suppose you have one more week to pay your annual subs! 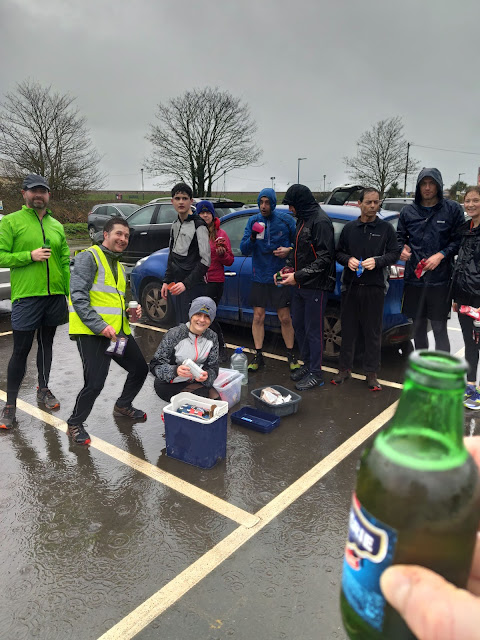