Todays hash reminded me of all those summer hashes that we're normally used to, but have missed this year!  15 of us arrived at the Route 5 diner's car park.  Thakfully the vintage car rally that had filled the car park earlier had left, but there were a few intersting old vehicles left to admire. Perhaps those were the ones that were in a fit state to drive?

Wide explained that he had had a nightmare with his keys. He was the hare and part way round laying the trail, he realised that they were missing.  He legged it back (keeping the last bit of the trail simple), but still couldn't find them.  He called Tight to bring up a spare set in case he'd locked them in the car - but still no sign of them. Turns out someone had handed them in to the diner!  Shame there were no fines this week!

It was a good hour's r*n, with a bit of shiggy and lots of shade in the wood to keep us cool.  A couple of long shorts, and he often took the opportunities to confuse us on the trail. Quotes of the week went to Bollards for 'Feeeling Tight today', despite Tight not being at the trail, and for Speedy telling us that the dot was by the tree.... in the middle of a wood.  Flower Power also took and amazing fall, which he deserved for coming to the hash wearing THAT shirt.

On On to next week - which is from The Kenn Centre, 3 Exeter Rd, Kennford, Exeter EX6 7UE - next the Partridges Cycles. CoViD-19 Test & trace registration required, in advance if possible: https://tiny.cc/HashReg 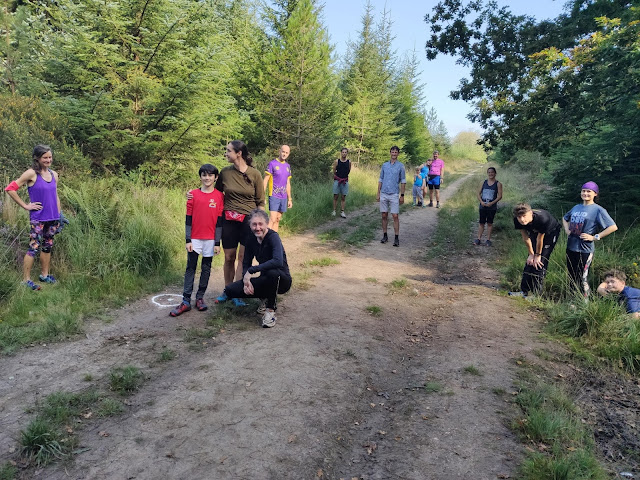