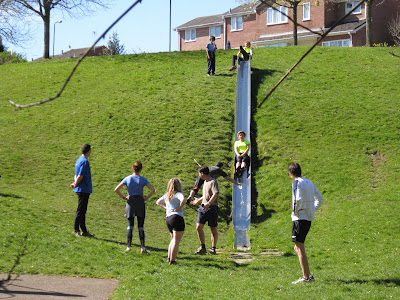 A last minute flurry of hashers arrived resulting in a respectable 22 hashers despite a number of regulars missing. There were a number of new faces and some "irregulars". Unfortunately most of the regulars were still there too! Emerald admitted to a bit of Roger-ing in the woods which may explain a lack of flour for the first stage of the hash.
Marshal Farts only managed the first bend before taking a seat-stop on the bench in the sunshine. Of course for this misdemeanour he was fined. Emerald was heard to say it would be more successful to lay the hash in dog poo as there was an abundance of it but we soon caught up with the flour trail.
It was on on up over the 1st of many hills and many fish-hooks and on to the first long short split. The sun was shining as the hashers spread themselves over the fields and to another long short split over Drakes Meadow. Twin Peaks called an impromptu hash halt as she sat to take in the view. Tuned-In decided it was time for a hash photo of the scenery but unfortunately the hares had not arranged the sun from behind so photography excluded the view!
Having run for 45 minutes the hashers thought they had reached the sweetie shop but alas - no sweets!! It was on on down the road and onto the hash mud - it wasnt true hash mud as it didnt even cover our shoes.
The trail led along a track, past some horses and up into the woods... although you could be forgiven for thinking the trail led straight on as only a handful of hashers took the challenge in the woods! Dr Jekyll worried she had lost Marshal Farts but he was up front to the sweetie stop. Tampa took a liking to the mini eggs and the packet was half empty before the last hashers arrived.
Following the chocolate revival it was on on up yet another hill where Tuned In and Chesty were overtaken by a serious runner - of course it transpired this was not a hasher! Down the hill the other side and there were hash antics in the playground. Hashers were taking it in turns down the slide which had to be "watered" to make it slidy resulting in a wet patch for Howling Wilf. Masrhal Farts couldnt hang on any longer and took a pee break in the woods. Obviously he was fined again for yet another mis-demeanour.
The hashers arrived back at the car park for beer and nuts - just in time before JC cocked his leg and peed in the crate!!
Fines were awarded to Mashal Farts (as specified!), Twin Peaks for taking a rest, Groucho for not carrying the pink bag and trying to award it to someone else before he even carried it! Emerald for Roger-ing, Tampa and Chad for using technology on the hash and obviously JC for peeing on the beer and nuts.
Next weeks hash is at Daneswood Car Park near Killerton.