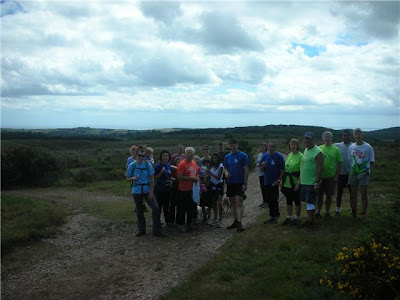 We were graced with 24 hashers today plus 2 four legged friends,but no Sherriff,was he sailing the seven seas we all wondered, or perhaps drinking Pimms on the deck.Anyway up stepped Spocky and offered to be acting sherriff, is he good at acting then someone was hear to ask !
Tampa explained in Tampa-speak the finer points of his trail or was it trial then off we went, well we didn't go far with many of the pack pretending to look for the trail whilst the gallant few went on searching.After about ten minutes the trail was found, on a route that Spocky had already checked out, so he told us.Everything went well for the next five minutes until we hit a bog with islands of turf for us to jump to or suffer wet feet, many of the pack were not good jumpers and many choice words could be heard when entering the water.Woodpecker was not happy with one aspect of cunning adminstered by the hare which involved a back arrow swiftly followed by a check-back, that's not right, he was heard to say using one of his many character voices.The Sherriff was of course informed.
Standards were maintained at the sweet stop where sweets and chocolate were up for grabs and believe me most of the chocolate was grabbed first.It was like watching gannets feed.This pause was quickly followed by a long short split however Isocelese claimed that had found another trail that he had taken called the M route,he was the only one on it.He is you be glad to know not still wandering over Woodbury Common on his own M route as we did manage to find him.Tail-lamp called on three at one point, no on four though, some of us wondered in fact we are still wondering.
Once back at the car park The Sherriff collected the fines inviting fellow hashers to stitch others up.However there was a catch as the stichers or snitchers were also fined.
It should be noted that one member of todays pack arrived with a pair of brand new trainers and managed to escape the beer from a trainer christening.How did they do this ! Well before leaving to come to the hash they entered their greenhouse and plastered their trainers with John Innes Garden Compost,how cunning is that !
Rumour has it that the offending trainers are at the present time size 9 but may in a matter of days become size 10.
Thanks to Groucho for the blog.