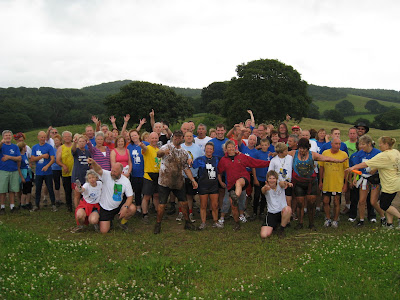 In complete contrast to last weekends poor turnout of 6, this weeks joint hash with Isca for their Roman Away Weekend turned out to be the biggest turnout of the year. In excess of 70 hashers were bused to Woodbury from all over the country.
The hare, Groucho was set to prove that you can have a successful hash with more than 1 trail and with help from his 2 trustee assistants (Blobhoblin and Tampa) had laid 3 trails to choose from.
A pink trail for any youngsters (or hashers who had over-indulged in the frivolities of 2 nights at the ISCA away weekend), a clockwise trail and an anti-clockwise trail. This involved hashers splitting into 2 groups to run the trail in differing directions. Checks would have to be interpreted carefully as they would be kicked out the way you had just come from, and there were plenty of double edged fish-hooks!
Blobhoblins Group set off with Radiohead (honorary visitor) setting off in the wrong direction. I guess this is what happens when you drive for 24 hours across France and arrive at 5am but still commit to running a hash that same morning! Tuned-In took a lighter approach being 6 months pregnant with peanut and kept pace with a leisurely stroll.
The usual suspects from City of Exeter did the hash proud by taking most of the fish-hooks. Spocky, Radiohead, Twice Daily, Runs Again and Stat-Nav happily checked out the route for the larger group of sluggish hashers. Stix kept a continual count to ensure there was no fear of him reaching a fish-hook by having 5 hashers up front. He struggled to count from 1-5 and so still managed to blag himself a fish-hook!
A few cunning twists and turns by the hare and we arrived at a hash halt by the reservoir. Mouldy and Creeper took charge of entertainment with mud wrestling - who could cover the other in the most mud.... including in the mouth! Utterley Buttocks arrived on the scene and rapidly joined in the competition.
To the cry "check it out", Spocky and Radiohead led and many followed. Harsh words were spoken as they fought over who was going to check the favoured path.
Miraculously for Groucho, both groups met up at the Sweetie Stop at the same time. Chesty felt this was an achievement worth congratulating. Buzby pointed out that for a Groucho hash, the achievement was the fact the trail met up at all - the timing was just a sheer fluke!
As we set off for part 2 of the trail, Creeper was concerned that having sat in a puddle (or was she pushed by Mouldy??) her bum was wet. Utterly Buttocks was concerned she had worn the wrong pants so couldnt take off her muddy shorts to get on the bus home. Creeper went one better and claimed she had no pants and would be going commando!
The excitement was clearly too much for Cathusalem who very quickly offered that if this was the case, Creeper was definitely travelling home in his car!
The hash continued through the woods and we soon arrived back at the car park to meet the bus. A fine spread of cider, beer, pop, crisps and chocolate biscuits awaited! Sheer extravagance for the City of Exeter hashers.
Everyone was cordially invited to the on down - a BBQ at Topsham Rugby Club which finished the days hash nicely and was a fitting end to Isca's Roman away jobby (as officially named by Sore-Point).
Thank you Isca for your hospitality enjoyed by all.