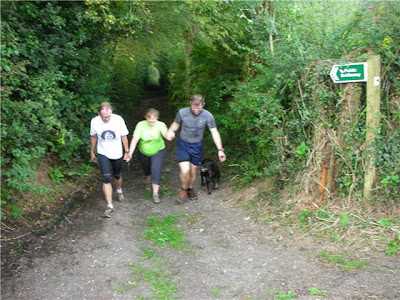 So it was a good show for Dr Jekylls hash, we circled up minus Groucho and Blobhoblin the rumour being they were having a weekend away together, how sweet. Anyway the hare gave us our instructions with the promise of no wet feet or hills. Obviously the hare is a Dr AND a Dr so we all believed her !!! How wrong can a group of hashers be?
Off we set through woodland, with the sheriff taking notes along the way in his little book, Fruity Bitz was seen to come out of the bushes from a pee pee stop, which would later come back and bite her on the bum (so to speak). A false trail meant that half the hash ended up going through very very smelly mud/sludge that was calf height. When the right path was called, it was a lovely flat and grassy area to run through for those that werent bogged down by muddy shoes. This was the point that Fruity Bitz realised her mistake in going for pee pee, as she had dropped her mobile phone. Oops !! So she had to go back and try and find it, and the very kind Baglady offered to go back with her.
The sweetie stop was at the top of a big hill, therefore was greeted with glee by all, but especially Tuned In who as we know is carrying an extra pound or two at the moment. She was greeted with a big cheer and escorted by Spocky bitz and Radiohead. While we enjoyed our sugar rush we were joined at the sweetie stop by a rather large horse who seemed reluctant to leave us. It would appear he wanted a tangy fruity treat too, but alas was kicked on by his rider and off they trotted.
Then the hills started - up down, up down, up down we went, then through a fresh water stream that was ever so freezing and knee high this time. So the next hill was run with frozen toes and the heavy thud of soaked shoes. The last hill was ENORMOUS and seemed to go on forever, with Horny woman and Tail lamp coming in last, beaten by Tuned In who did AMAZINGLY well, great respect to her and peanut !! On home was called, and home we arrived, a great and varied hash was enjoyed by all.
Fines were given mainly to Fruity Bitz (who amazingly found her phone) for going pee pee, losing her technology, going back to find her technology and for using technology. Dr Jekyll was fined for using nerd names despite promising herself she wouldn't get caught this time. Naming down down was given to Michael who because he is emigrating to OZ next year will now be known as Down Below.
Thanks to Horny Woman for doing the blog. Also I would like to thank, Chesty, Radiohead, Spocky, Howling Wilf and Dr Jekyll for their assistance in pulling and pushing me up the hills!!! ED.