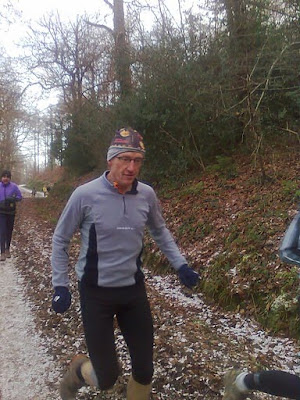 Seeing fellow hashers appearing today was as interesting as the hash, as those arriving by car had the experience of trying to drive up a very slippery hill in order to park their vehicles. Blobhoblin decided once he had parked up to place logs under his car as he'd experienced slippage once he had stopped, in Blob speak this means he noticed his car starting to skate downhill. Next Geronimo entered the car par arena where launched himself into a 27 point turn with a touch of nudge to finish, the nudge being to touch the Blobhoblin vehicle. Once in the circle Geronimo denied all knowledge of the parking offence, the sheriff was having none of it,ten pence fine was the order of the day. Finally last to arrive was Isoceles would adopted the more direct approach sandwiching his machine between two cars and then fiding it difficult to open the car door.
Finally all twenty hashers were off, but only for ten metres where they then encountered the first check, at this point Radiohead went into over-drive running all over the place whilst several other members of the pack decided to let him get on with it.After what seemed like an age on-on was called, not by Radiohead but the ever present Stat-Nav, what a hasher that boy is !
We were treated to a steady uphill climb right from the start. The hare, Groucho, informing us that it would warm us up on such a bitter frosty morning. In fact this climbing business continued for some twenty minutes, well thats what it felt like. Now several hashers were in a state of undress, in this case sweat shirts were coming off, what a hardy bunch. Whilst these hashers were undressing the faint cry of "wait for me" could be heard further down the hill, yes it could only be one person the Merseyside accent the give away, yes it was Horny Woman. Can I get my breath back please was her cry and the pack being a kind lot went off and checked it out as luck would have it the trail was not found for a couple of minutes the bad news was, more uphill. Eventually things levelled off to the relief of Horny.
Next came the swing on a branch challenge those not able to land in a circle from the swing had to check it out. Slipshod failed the test but for some reason Miss Twin Peaks decided to chase after our solitary Slipshod, rumour has it she loves chasing men in woodland areas although she prefers forests so we are led to believe. (I reckon it was the lycra that did it - ED) When Slipshod did however manage to find the sweet stop he was treated like a hero.
Once we had devoured the sweets it was on on to the next challenge, the log challenge which was in the horizonal position but covered in a lovely layer off crisp frost enriched with ice, lovely ! Several members of the pack failed to complete this and were of course fined. Eventually we reached the end of our little adventure, the car park. Fines were collected by the sheriff and cans of beer were given to picture competition winners. Finally Tail-Lamp was presented with the "GM Bone of Contention Award" for committing a hash crime that stands out above all others to date. The said Tail-Lamp had purchased a new pair of trainers and knowing the hash rules regarding new trainers decided to stand in a bag of John Innes Compost with trainers on inorder to discolour them and had thus escaped the drinking from the new trainer ritual.
Thanks to Groucho for the blog, on on to Core Copse next week on East Hill Strips.