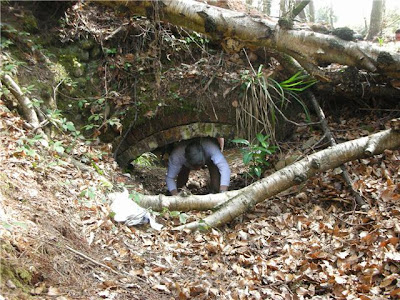 The car park at Squabmoor had been literally invaded by hashers, leaving no room for any normal people to park. Spocky called the group together and provided them with the instructions for the hash, and added that he had also arranged the lovely weather. (friends in high places, Spocky?).

Woodpecker arriving fashionably late pulled into the car park, to which Spocky declared "it must be quarter past, Woodpecker has arrived". If we weren't convinced of the time already we were soon to get our second confirmation....5 mins after Woodpecker, in rolls Tampa. "It must be 20 past now!" exclaimed the hashers in unison.

...but they weren't the last to arrive!! (more about that later).

On On, across the road and towards a crafty left turn over the bank, and on to what can only be described as a Spocky assault course. Through woods, balancing across fallen tree trunks, jumping streams, through a tunnel and finally up a bank to the first regroup. From here it was straight into a long-short split. For the longs there was another periless tree trunk crossing, where Isoceles waited with camera in hand to capture anyones misfortune. However, we all made it across, just!

From the distance a familiar voice could be heard - Sorepoint - a little less familiar was her calls of "On On". Could this really be Sorepoint front running?? (What on earth has happened to our hash? Come back Groucho your hash needs you!). The chasing pack was lead by Paperwork and Stat-Nav, that was until the latter took a tumble into the gorse bush.

On On to the sweet stop and time for a quick hash flash. Just as we were finishing the other late arrivals came into sight. Mr Hyde, Dr Jekyll, Tree Creeper and Martial Farts had finally arrived and left everyone else wondering; "were they really late? or just really early for next weeks hash?". It was On On, to real confusion! The hash had split in different directions before the hare gave a clue, and back came the hashers with Dynamo showing true hashing spirit by running straight through the mud.

Up the hill and the hashers were soon following Dr Jekyll....alas they were following her the wrong way!

On On came a loud call....from above? (Was it Spocky's friends in high places???). The mystery para-glider clearly knew that the only people to be daft enough to run over the common on a beautiful Sunday morning must be hashers. This be must the first time we've ever had anyone fly the hash?

Down past the lakes, across the road and a fish-hook was waiting for Stat-nav, Paperwork and Mr Hyde, Sorepoint deliberately slowing down to let Mr Hyde take the honours. However, justice was done as around the corner and the next fish-hook lay in wait for her. A bit further on and Stat-Nav and Tampa arrived at another fish-hook. Naughty Tampa took the opportunity to change the number at the fish-hook. Tampa was later fined for Tampering (suppose it does what it says on the tin!).

It was then On On to a second sweet stop by the reservoir before embarking on the muddy trail home. There was just enough time for Lucy to spot an adder in the undergrowth on the way back to the car park.

Not a bad hash really Spocky - you'll make a good hare one day! Anyway, next week's will be really good. Newton Poppleford car park. On On!