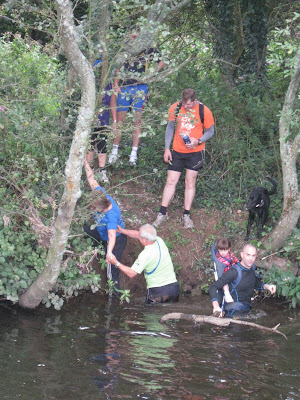 It was nice to see a lesser used venue for the trail today. We all gathered opposite the pub in the sunshine......no wait, it was a bank holiday weekend, the cloud.
We had some hash virgins today, Ray and his daughter Louisa and Horny Womans bit of stuff all the way from Oz, Paul! Needless to say the merciless piss taking started immediately, well, we had another 'visitor', Radiohead, who saw it as his duty to ensure Paul intentions to our very own Horny Woman were entirely honourable. (I'm not sure we ever established that they were????)
After welcoming our visitors and virgins, Spocky assured us of a lovely, dry trail that had taken him approximately 1 hour to lay as he got up very late, therefore it was only one and on. We set off in our various directions, most of us heading off in the wrong direction.
On up the hill we were called with the walkers actually not at the back for once. Radiohead began his interrogation of Paul while Bell Toll and Tuned In eagerly listened on. It did appear though that Pauls answer to all questions Australian was, sharks, snakes and spiders. That covered most of it!
Onto a long, shor split where the shorts were taken up a really steep hill to meet the longs at the top. Then on to a check where PP and Bell Toll were noted loitering and FF shot off in the wrong direction with Twin Peaks finally calling on on.
This led us to a few confused looking hashers as someone had kicked out the next check so the FRB's had shot off the wrong way.....shame.
Once the hare had shown us the way, the walkers ended up reaching the next fish hook before the runners had a chance to catch us up! Fortunately the hare had very kindly placed himself right behind us.......the easiest fish hook I ever had to do!
As the runners caught up and duly overtook us we got to another long, short split where more of our marks had been kicked out so the longs got a little lost for a while.
The shorts all waited at the regroup as a 'real' runner came past with Ring Piece and No.2 both breaking into a bit of a trot to follow him, he certainly hadn't fallen out of the ugly tree! Horny Woman for once didn't pass comment! Was she being a little shy today???
Once we were all back together we were shown on on with a dry alternative pointed in the other direction. The wet on on took them steeply down the bank into the river Otter. For those who took the dry option, we headed across the bridge and enjoyed watching them walk down the river. At this point there was some concern that we had managed to lose Ray and Louisa, the hare however assured us they were with Isosceles, who also was nowhere to be seen, but at least they were lost together! Once all the wet hashers emerged from the river we set off on another long, short split ending up at the sweetie stop where a great selection of sweets emerged.
On On then with the trail going back through the river and the rest of us just followed the path back to the main road, meeting up with the wet hashers as they came out of the side road to meet us.
We had a hash circle on The Green with Odd Bitz fining the usual suspects and as if to prove my point about Horny Woman being on her best behaviour, I don't think she got a single fine this week.....almost unheard of! Despite it being Spockys Birthday Hash, I'm ashamed to say we failed to sing him an terrible rendition of Happy Birthday! Apologies for sparing your ear drums Spocky. Due to the weather we had a quick vote who still fancied a picnic by the river and we voted yes so quite a few of us did just that.
Well done Spocky and hope you had a lovely birthday.
On On to Squabmoor Reservoir CP next week.