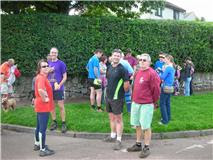 Sunday morning and we all gathered for the Hares' second ever trail at another new location for the City of Exeter Hash. Broadclyst! So new infact some of us had to stop and ask for directions on the way....others meanwhile were observed pulling into the car park and asking some locals sat on the wall for directions...well done Wide Receiver! (Excelled only by the fact he then drove a full 5 yards and parked up in a non-parking space when there were plenty free around the car park!).

Still this wasn't the only event to occur whilst we gathered for the hash circle. FF broke the circle to say hello to long lost friends and then bombing around the corner came Up Yours. Now this really did test the resolve of the hash circle...do we stay in circle whilst she drives towards us or run for cover? Luckily she pulled up a few yards short and jumped from the car to inform us that she was not here for the hash but was on her way to a craft fair. Her appearance was only to return the Hares T-shirts...very nice to see you Up Yours!

Then more friends appeared, on foot, this time saying hello to Up Yours and Dr Jeckyl who also broke the hash circle! Tut, Tut!

Then it was over to the hare....and an inpromptu history lesson...come on, wake up Spocky!

History lesson over it was on to what we all came here for...running! Well when I say running...

Around the corner and straight into a long - short split. The observant longs ran past the dots indicating the trail went down the lane to the right, but after a few confused looks at each other they were soon on their way again. Across the road, onto the footpath and this unholy lot were soon running through the grounds of the village church. On a Sunday morning as well, whatever next!

They soon caught up with the shorts and continued the trail through the fields. Laying in wait in the field was a fish-hook. Not that you would have guessed as the first hashers ran straight through it. Stat-Nav the only one stupid enough to return to the hare and remind him that he had forgotten to say at the beginning how many hashers should complete the fish-hooks.

At the re-group we were warned by the hare that the next long-short split would take the longs on a really long run. The hare wasn't wrong, it was long...but it would be even longer if you went the wrong way and got lost? Well done Spocky and EJ, hope you enjoyed the extra distance.

After the sweet stop it was on down the lane and at the check a left turn passed some houses and onto the footpath. "On On" called Stat-Nav.

At the next check, Stat-Nav advised FF that he was taking what looked like the obvious direction. After 20yards a voice was heard bellowing at him from the bushes, "where are you going? This is my land!". Stat-Nav returned sheepishly to the check, and started checking out again. Concerned that he thought he had heard the clicking of a shotgun Stat-Nav called back to the farmer; "Which way does the footpath go?". "That way" pointed the farmer....and off went Stat-Nav....rather quickly! On On, although in Stat's mind he only had to outrun Groucho to avoid being shot!

Onto another long-short split and some more very scenic running. At the next re-group the hare advised that he had given the walkers a shor cut. It wasn't long now before the tour of Broadclyst was complete and we were back to the car park for the circle, beer, nuts and fines.

But the afternoon didn't finish there. It was On back to Isosceles house for a cream tea in the lovely autumn sun. A very nice touch Isosceles, very generous of you! The arguement continues though; cream on top of jam or cream then jam? The hashers also enjoyed a tour of the grounds (almost as far as the hash itself) before the host announced a tennis challenge to all comers! Go X-Bitz!

A lovely trail Isosceles, thank you very much....although laying parts of the trail by car has been put on record!

A reminder to everyone that the Autumn Gathering is the weekend after next. Buffet food for the Friday night - please give details to Spocky of what you are bringing. And remember it's 70's night fancy dress on the Saturday night. On On.