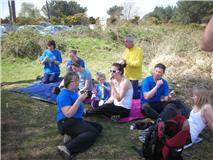 When being one of the first to arrive in the car park at todays venue at about 10.40hrs I was greeted by our hare EJ esq who informed me that he had just finished setting the trail having been out in the wilderness since 08.00 hrs. Where has he been thoughts entered my head, will we get back before dark was also another. Soon the pack started appearing some entering the car park via a deep pothole Sorepoint and Paperwork amongst those entertaining the rest of us as they inspected their car for damage. One blamed the driver the other blaming the navigator. As luck would have it there was no damage done to the car not so for the skills of these two hashers they were of course fined on the basis of showing to much drama, or attention seeking.
Spockybitz and clan found their way without any problems, he then got out of his car and promised us all ice creams that were within the depths of his cool box. Would they have melted by the time we got back I wondered on the basis of what the hare had told me, I of course said nothing.
We finally set off, all 29 of us heading for the great unknown, well the hare knew, well we thought he knew for within 15 minutes having reached a check none of the pack could find the trail, not even the hare. There was a moment of head scratching then EJ remembered and we were off again at break-neck speed well about six of the pack were although they soon encountered a dreaded fish-hook, in fact the same group kept finding all of the fish-hooks, they reminded me of border collies with this to and fro motion. The pack was spread out by the time we, the shorts, reached a hash-halt, safe in the knowledge that the longs were still out there, somewhere. We then crossed over a road and headed on our way once more FF and Stat-Nav assisted by Spocky taking the lead a bit like a scouting party, whilst the rest of us ambled on our way with Horny Woman and Ring Piece bringing up the rear. Next port of call was Wheathill Plantation for a sweet stop, not long til were back from here Tampa was heard to say. Wrong Tampa our hare had other cunning plans.
Next came a visit to Frying Pans car park here to the relief of some was a hash halt. Once on the move again came another long short split with the distant view of Four Firs thrown in for good measure.Finally I can report we all arrived back in the car park at our starting point although some took a rather shorter route which was not part of the trail ,Stat-Nav, Horny Woman, Ring Piece and Tomtom.
Thanks to EJ for laying the trail and to Spocky for providing the ice creams which I can report had not melted.