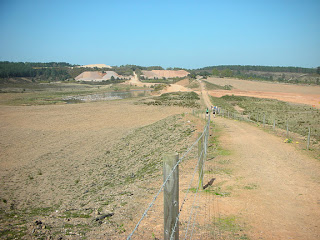 So full was the car park today that many hashers parked in the road, not the middle of the road you understand.Yet within the car park our hares were no where to be seen, neither was their car.Spockybitz put on his anxious face, whilst little Itsy played un the puddles,with minutes to go until the bewitching hour our hares FF and PP appeared on the scenebut in their car. Had they been off road ! Spockybitz completed the hash register with a smile on his face, the circle formed, well behaved they were too, no Stat-Nav so Twin Peaks was made deputy sheriff with Oddbitz sheriff, the main man.He was so eager he pulled out his pencil and paper just to make us lesser mortals beware of the consequences of any unlawful acts. Then we were off, at a snails pace as the pack meandered between the trees, whilst high above the sun shrone brighty, a great day for meandering between trees. Suddenly someone spotted a dark shape in the wood, it came closer, several hashers stopped in their tracks, what can it be, I can't make it out were just two of the words uttered by several anxious hashers. The shape was by now getting closer and made a noise, "Ben Ben !" it yelled, ....our frightening dark shape was indeed Tampa who then approached the pack and said, "Am I late !" Out came the sheriiff's equipment, plus pencil and paper.

The usual same faces appeared to find all of the fish hooks as we all continued on our way going deeper into the wood, they were like border collies coming back to check that the sheep were all in tow, which they were of course. We were treated to three long short splits which kept the pack together if you get my drift. The pack were heard to make no complaints, which was good news, in fact they were rather a happy bunch. The sweets were on, yes at the sweet stop, anyone witnessing the scene of hashers devouring the goodies before them must have thought that they had been deprived of sweets in their childhood.Not a single sweet was left. From the sweet stop we started on the long trek back to the car park via two more long short splits which were welcomed by the short members of the pack one nameless short hasher says let the longs get on with it, whatever 'it' is. Oddbitz continued to use his equipment, resulting in several fines for the Christmas Do fund, keep up the good work sheriff.Finally our thanks must to the hares for their trail or was it trial and to Ex-bitz for laying on the food for the AGM at Spocky Towers